Grace (Japanese: グレース Grace) is a Coordinator who appeared in the Fallarbor Town Contest. She battled many, but lost to May in the second round. She is usually composed but she can be silly at times. 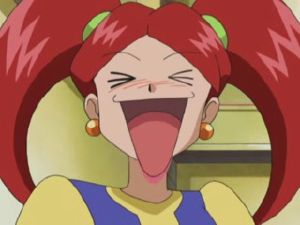 For example, when May apologized on Brock's behalf she burst into laughter.

She also has a big appetite and she often doesn't know her own strength, like when she shoved May all the way over to Ash and they both hit the floor.