From the Azurilland Wiki, a database for the Pokémon series that anyone can contribute to
Jump to: navigation, search
← Gothorita | Gothitelle | Solosis →

Gothitelle (Japanese: ゴチルゼル Gochiruzeru) is a Psychic-type Pokémon introduced in Generation V, known as the Celestial Body Pokémon. It has the ability Frisk. Gothitelle is a version-exclusive Pokémon for Pokémon Black. One Gothitelle is used by the Elite Four member Caitlin. Gothitelle is the evolved form of Gothita. 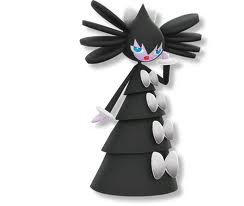 Gothitelle looks like a feminine figure in a gothic dress. Its "dress" is black and layered, with four small white bows going down the middle. Its skin is somewhat pink, and it has oddly shaped, blue eyes and appears to be wearing lipstick. It has long skinny arms with white cuffs right before its small pink hands, which seem to have only two digits. It has no legs, or at least non visible ones. It also has four thick strands of 'hair' coming only on each side of its head. It could be possible that the four strands of 'hair' could be four antennas that either amplify its Psychic attacks and abilities or send out sound waves to other Gothitelle in order to communicate, but this is just pure speculation. It has a point on its head, decorated with a little white bow. Its appearance may be acreddited to the "lolita" fashion craze.