From the Azurilland Wiki, a database for the Pokémon series that anyone can contribute to
(Redirected from Gold)
Jump to: navigation, search

Gold (ゴールド, Gōrudo?), or Ethan, is the protagonist of the Pokémon Gold and Silver games and a character of the Pokémon Adventures manga, having appeared in the Gold/Silver/Crystal arc, the Emerald arc, and most recently as 16 in the HG/SS arc.

In the Pokémon Adventures manga, Gold is immature and mischievous, and likes playing billiards, but sometimes he may use his Pokémon to cheat. He often listens to the radio because of his idol, DJ Mary from the Goldenrod Radio Station. He usually wears a pair of goggles and travels on a scooter. Instead of throwing or kicking his Poké Balls, he uses a billiard cue to shoot them out. Gold's hobbies include gambling, skateboarding, and trying foods from different cities. Professor Oak noted that while Red had some odd habits, Gold is much more immature and mischievous. Prof. Oak stated that Gold's special skill is Pokémon-hatching and is known as the "Breeder". He has the ability to draw out the largest potential of a baby Pokémon, having lived with Pokémon his whole life.

Ethan is a young trainer from the Johto region, who sets out to prove himself three years after Red became the 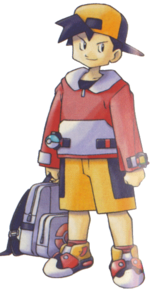 League Champion. Ethan is the male protagonist in Pokémon Gold, Silver, and Crystal. Ethan's journey as a Pokémon trainer begins when Professor Elm asks him to run an errand for Mr. Pokémon, who lives north of Cherrygrove City. Because he may encounter dangerous wild Pokémon along the way, Elm gives him a choice between three Pokémon to protect him: Cyndaquil, Totodile or Chikorita.

Ethan meets another boy his age watching Elm's Lab from outside. When he tries to talk to him the boy abruptly shoves him away. The boy, Silver, will become Ethan's rival, analogous to Blue in Generation I. Ethan continues onward and finally meets Mr. Pokémon and completes his errand. While there he meets Professor Oak who, upon realizing Ethan's bond with his new Pokémon, gives him a Pokédex. On his way back home, Ethan again meets Silver, who has stolen one of Elm's remaining Pokémon. After defeating/being defeated by the boy in battle, he learns his name and relays it to the police in New Bark Town. Professor Elm allows Ethan to keep the Pokémon he chose earlier, and encourages him to compete in the Johto League. 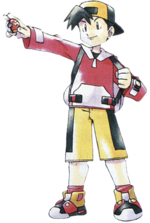 From there Ethan begins on a Pokémon journey in the Johto region, facing off against its eight Gym Leaders, defeating and disbanding the newly reformed Team Rocket, and becoming League Champion by defeating the Elite Four and its previous Champion, Lance at the Indigo Plateau. Along the way he also teaches Silver to respect Pokémon as living creatures and not just as tools for battle. After being declared the League Champion, Ethan then takes a short trip on a ship, the S.S. Aqua, from Olivine City to Vermilion City in Kanto. Journeying across that region, he battles against its own set of eight Gym Leaders, including two new faces, Janine, who replaced her father Koga on his promotion to the Elite Four, and Blue, who was formerly League Champion himself, and replaced Giovanni after the latter fled. Upon getting permission from Professor Oak in Pallet Town, Ethan heads for Mt. Silver via Route 28. His journey comes to a close when he finally faces the legendary trainer Red deep in Mt. Silver's cave, who had been

training there since shortly after he became League Champion three years prior.

Gold appears in the spin-off, Pokémon Chronicles, but is renamed as Jimmy (Kenta). In the anime, Jimmy is a traveling Pokémon trainer from New Bark Town in the Johto region. He received his first Pokémon, a Cyndaquil from Professor Elm. From then on, Jimmy set out on his journey becoming a Pokémon trainer, traveling the World of Pokémon, competing in many challenges, and catching newer Pokémon along the way.

Jimmy is portrayed as a gutsy yet impulsive trainer, charging recklessly into situations without forethought. As such, his offensive battle style mimics this behavior, as his Pokémon are trained to withstand attacks than evade them while fighting, preferring to face an opponent head-on. His primary goal is to become a strong Pokémon trainer, and ultimately rise to Pokémon Master. Jimmy became very determined and dedicated to winning many battles with his team and made a promise to them that they would travel and win every competition together.

Of all his Pokémon, Typhlo

sion is Jimmy's most trusted and closest companion. Since the beginning of their journey, the two have since faced many challenges and obstacles together. After suffering a humiliating loss to Silver, Jimmy's rival, Jimmy and Cyndaquil worked hard on their progress and soon Cyndaquil evolved, and later became the strong Typhlosion. Jimmy has shown that not only is he a great trainer, but his bond with his Pokémon runs very deeply and they will all do whatever it takes to get things done.

Jimmy's notable trait is his signature catchphrase "You rock, you rule!", a quote repeatedly expressed to his Pokémon with a thumbs-up victory pose after winning a battle. In the Japanese version, he uses the phrase "Okay! Perfect!". He has a noticeable crush on Marina, though refuses to admit it out loud. Both he and Marina participated in the Silver Conference a full year ahead of Vincent. It is presumed he is now traveling in Kanto.