""I'm the top student in the beginning class of the most exclusive club in the world, Pokémon Tech. It's sad that others aren't blessed with my beauty, my talent, my humble attitude. People call me a star, but I'm just Giselle.""
— Giselle introducing herself.

Giselle (Japanese: 優藤 聖代 Seiyo Yūtō) is a character who attends the Pokémon Technical Institute. She first appears in IL009: The School of Hard Knocks 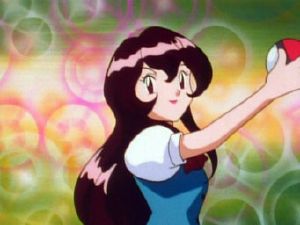 While Ash, Misty, and Brock were traveling through a fog, they noticed a small boy being picked on by his classmates. The group stood up for the boy and became friends with him. He then explained to them that he went to a private academy not far from there, shortly after, he escorted them there. While walking to the academy, the group noticed a picture in the boy's pocket. He takes it out and reveals that it's a picture of a pretty girl. 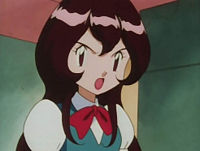 The boy explains that the girl's name is Giselle, and she's the most elite student at the academy. He also mentioned that Giselle picked on him a lot and called him weak. Misty asked why he carried around a picture of her if she was so mean, and the boy responded that even though she's mean, she's pretty to look at. Ash and Brock blushed and agreed, which just angered Misty because she knew they were getting all mushy just for a pretty girl. Misty then stormed to the academy, quickly followed by Ash, Brock, and the boy.

The group later meets Giselle, who is followed by a group of loyal followers. Misty tries to pick a bone with Giselle, but Giselle just goes on to say that the boy was still weak and that no one could defeat her. She proved it to her by taking her to the computer lab and putting the data from her Pokémon and Misty's Pokémon into the database, by doing this, the computer told them that Misty was bound to lose if she challenged her. This enraged Misty and she challenged Giselle to a Pokémon battle. Instead, Ash said that he would do it. This lead the group out to the courtyard where Ash battled against Giselle while she used her Cubone. The battle ended in Ash's victory, and Giselle was shocked at her lost. She admitted that she wasn't as strong as she thought she was and that there were people stronger than her.