Giovanni is the leader of Team Rocket and the Viridian Gym Leader in the Red, Blue and Green Chapter of Pokémon Adventures.

Giovanni reveals that he too is a Trainer of the Viridian Forest.

Giovanni has been the leader of Team Rocket for quite some time; serving as a secret agenda for the man also known as the Viridian Gym Leader. He is also shown to have a kinder side to him, being known as a Trainer of the Viridian Forest, as he protects Yellow from Lance's attacks.

As the leader of Team Rocket as well as the final Gym Leader in Kanto, Giovanni was one of the strongest trainers in the world. He was able to fight on equal footing with Red and managed to gain the upper hand throughout the battle. He was also able to incapacitate Lance and his Pokémon, something that not even Mewtwo was unable to do, though Lance comments that he let him win on purpose. Giovanni was able to catch the powerful Deoxys with ease. However, his disease took a toll on his body and likely affected his skills as a trainer.

He is a lot crueler and more ruthless than his anime and game counterparts, as shown when he commanded his Cloyster to slay two helpless Magmar by breaking them in half. He holds Pokémon in very little regard, even going as far as to manipulate the innocent Pokémon that were subjected to his own experiments, viewing them as mere weapons. When he was defeated for the first time, Red states that his views on Pokémon ultimately led to his downfall. When Blue chases after him, Blue tells him about his reputation as :Giovanni of the Land. Giovanni smirks and asks Blue the importance of his own reputation.

One of his commanders, Sabrina, stated that Giovanni is a charismatic leader, enabling most of his subordinates to stay loyal to him to the very end.

Despite his veneer of ruthlessness, Giovanni later shows his more humane side. The main reason why he wanted to capture Deoxys was not motivated by revenge, but rather out of a desire to locate his missing son, who was kidnapped by one of the Pokédex Holders' archenemies. While his commanders believe that he only wanted to utilize his son as the heir to Team Rocket's empire, Giovanni actually wanted to reunite with his son before his death. Another example of Giovanni's caring side is when he aided Yellow in fighting against Lance of the Elite Four, though this is likely due to Team Rocket's plans being interfered in by the Elite Four.

He is identical in appearance to his game counterpart.

File:Red defeats Giovanni.png
Giovanni's defeat at the hands of Red.

first encounters Giovanni at the Pewter Museum, who pretends to be an amateur fossil hunter and archaeologist. They come across two berserk Magmar destroying the Museum, and after Red defeats them, Giovanni hands him an Old Amber as a reward. As Red leaves, Giovanni laughs spitefully that a mere child like him could defeat Team Rocket. As the Magmar reform and attempt to kill Giovanni, he has his Cloyster kill them by freezing them and shattering their ice form. Later, Giovanni assigns his executives, Lt. Surge, Sabrina and Koga, to fuse the three legendary birds (Articuno, Zapdos and Moltres), but the Pokédex holders destroy his plan. As Red travels to the Viridian City gym to find out what happened to its missing leader, Giovanni comes forth, revealing himself to be both the Gym Leader and the leader of Team Rocket. He challenges Red to a battle, stating that he will join Team Rocket should he lose. Although Giovanni quickly gains the upper hand as he was a far more experienced trainer, he was finally defeated by a Thunderbolt attack and disappears.

During the battle taking place at Cerise Island, Giovanni observes the fight between Yellow and the leader of the Elite Four, Lance. He reveals that he freed Red from Lorelei's ice prison, promptly giving him the Evolutionary Stones found at the bottom of Vermilion Bay, allowing Red's Eevee to evolve. As Giovanni fights Lance, he destroys the protective shield that was giving Yellow such a hard time fighting back. However, as the fight seemingly sways to Giovanni's favor, Lance states that Cerise Island is an amplification device for the gym badges, and with Giovanni's Earth Badge, he can summon the giant bird. Giovanni then retreats, leaving Yellow to do battle with Lance. As Yellow emerges victorious in combat, he tells his executives to return back to their gyms, telling them that now is not a good time to identify themselves as Team Rocket.

During the Pokemon League's Gym Leader Exhibition Match, it was revealed that during Giovanni's time as the Viridian Gym Leader, he wrote a manual on how to raise Ground Pokémon called "Secret Earth Arts". It contained all of his immense knowledge as an expert on Ground type Pokémon. Blue discovered this book in the Viridian Gym after he took over as its Gym Leader in the wake of Giovanni's departure. He believed he need to master all its secrets as the new Viridian Gym Leader, so he used it to train his Rhydon for his battle against his master Chuck. 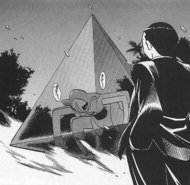 Giovanni emerges as the head of Team Rocket on Birth Island, where he attempts to wake Deoxys from its slumber. He then sends his new subordinates The Three Beasts to distract Red, Blue and Green while he makes preparations for Deoxys. Later, when Deoxys returns to Birth Island to recuperate from its conflict with Red, Giovanni appears before it, and promptly captures it in its weakened state. Giovanni later appears at Trainer Tower, where he is confronted by the Pokédex Holders and Mewtwo. Mewtwo reveals to Giovanni that it holds a grudge against him for creating him to be used for destruction, but Giovanni merely traps it within a special armour called M2Bind. He then leaves their company in order to search for his son. When Giovanni uses Deoxys to discern that Silver is in Viridian City, he sends Sird and Orm to find Silver, while he deals with Red and Mewtwo. 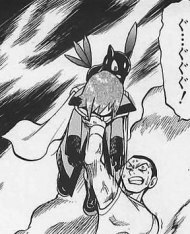 Giovanni, seeking payback in their previous battle, proclaims that he will fight Red alone. He then summons Deoxys to fight against Red's Mewtwo, with the battle swinging in Red's favour. However, Giovanni is suffering from a disease, and is taken by Orm to recuperate. When Giovanni finally meets Silver, his son expresses contempt that his father is associated with a criminal organisation. However, before Giovanni can stop Silver from leaving, Carr betrays Giovanni, attempting to plunge the airship into the Viridian Gym. As the impending disaster looms, Red tells Deoxys to conjure up a black hole, which promptly rescues Silver and Giovanni from the airship.

However, when they emerge from the black hole, Giovanni and Silver find themselves in a flaming chamber, contrary to Red's expectations. Giovanni puts Silver's life ahead of his own, holding him away from the flames; commenting how much Silver has grown up since he was a child. As Blue intervenes with his Rhydon, Silver refuses to acknowledge Giovanni as his father. Blue teaches him that he was once a lot like Silver, and that he should accept Giovanni as his father. Silver does so, crying over Giovanni's unconscious body. He orders his Ursaring to take Giovanni back to his base, in order to recuperate from his injuries.

Giovanni's whereabouts are unknown, and his son Silver is searching for him.

Giovanni specializes in ground type pokemon, but has been known to use other types.