The Giant Chasm is a location found in Unova where Kyurem can be found here as a level 75 deep inside. This area mainly specializes in having many Pokémon from the previous generations such as Tangela and Ditto. It is also famous for being the only place in the Unova region that houses Ditto. 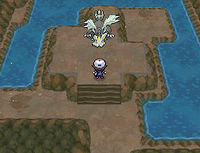 Kyurem in the deepest part of Giant Chasm

It is stated that whoever enters the Chasm, surely disasters will follow. The residents from Lacunosa Town refer to it as the "hole" where a dangerous monster lives.

When you come to the Giant Chasm in Black 2 and White 2, you will battle the following main Team Plasma Members.

(Black Kyurem/White Kyurem cannot be captured because Ghetsis's "staff" when you first encounter it but when you recieve N's Zekrom (Black 2)/Reshiram (White 2), you can come back to the Giant Chasm and battle it again. When you come back, it will be at Lv. 70 in it's normal form and to become Black Kyurem/White Kyurem, it will need to be combined with Zekrom/Reshiram by using an item called the DNA Link Pin.