Generation V in the Pokémon franchise, is a term used to describe the fifth set of games introduced into the series. The first two new Pokémon that will star in the 13th movie Phantom Champion Zoroark have been revealed as Zorua and Zoroark. The titles for these games have been revealed to be Pokémon Black and White. The games were released on September 18, 2010 in Japan. 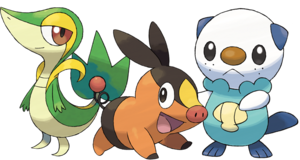 be a grass snake, a fire pig and a sea otter, respectively. Game versions have been revealed to be on Nintendo DS and their mascots are Zekrom for Pokémon White and Reshiram for Pokémon Black.

People were invited to the early screening of this year's movie on July 3, 2010; "Zoroark; Masters of Illusions". The trailer revealed a new Pokémon called Patrat, and another one named Victini, a legendary "Victory Pokémon". On July 25, 2010 this Pokémon confirmed to be a ledgendary and its name is Victini. These Pokémon were confirmed on July 10, 2010 with the premiere of this movie. On July 3, 2010 images of Bandai toys have leaked revealing Pansage, the grass monkey Pokémon. On July 9, 2010 an image of the demo of these games leaked revealing a new Pokémon Tranquill. On July 11, 2010 Pokémon Sunday revealed the silouhette of a bird Pokémon, and his name confirmed later on the day with the Coro Coro leaked scans as Wargle, the Valor Pokémon. In addition a new Pokémon was revealed too, and it is Munna's evolution, Musharna, which has the ability to use Dream Smoke to send you to the Dream World. On July 21, 2010, a new Pokémon was revealed on Oha Suta, Alomomola. On July 29, 2010 Oha Suta Shows a 6-minute new footage revealing three new Pokémon: Deerling, Patrat, and Swanna. 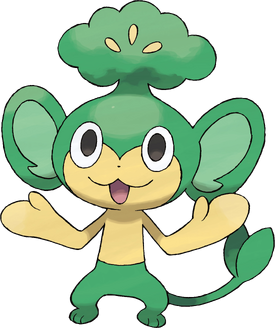 On August 7, 2010, pictures from Corocoro were leaked containing info mainly from Pokémon that has been revaled from trailers. In addition to these, Basculin image was revealed from demo. On August 10, 2010 more clear images was leaked from the Demo revealing Audino image. On August 18, 2010, a video was shown on many websites revealing two unknown Pokémon: the blue octopus Purrlion and Maractus. On August 21, 2010, the Pokémon from the Bandai toys was revealed as Pansage. On August 3, 2010 many images leaked from Yahoo images (Japanese) and revealed an image of a new Pokémon which showed Kurumiru. On August 6, 2010, four new Pokémon from demo were leaked on Pokejungle, one was Emolga The Flying Squirrel Pokémon, Darmanitan's pre evolution, Darumaka, as well as Basculin and Audino.

On September 1, 2010 several new Black and White commercials were available to those who have Japanese Wiis and it appeared there could be a new Pokémon chasing Chillarmy in the third video. Also on the same date, evolutions for the starters were leaked. On September 2, 2010 during an update on the official site of Pokémon, a new Pokémon, Throh, in an image but it was all covered with accessories from Pokémon Musical. On September 4, 2010 another image was leaked revealing two new Pokémon that was part of the monkey trio a long with Pansage. On September 6, a trailer for the special episode Can’t Wait! Pokémon Sunday BW Special! revealed a new cat Pokémon, Purrloin. On September 11, 2010 six new Pokémon were revealed by the Coro Coro's October issue. Pokexperto site started revealing all Pokémon before the release of the games.

Generation V has many new enhancments, as do all the other generations. This generation, however, is unlike the others. Almost everything is changed, including graphics, battle changes, plots, rivals, towns, viewpoints, Gym Leaders, the Elite Four, legendary encounters, landscape, competitions, and much much more.

The graphics in Pokémon Black and White have changed drastically. Below are some of the things that Generation V has to offer in this new gaming century.

The Battling System has changed very much, below are examples of some changes of it.

The Taiji and Wuji Dragons

The Kami (The Japanese Gods)