From the Azurilland Wiki, a database for the Pokémon series that anyone can contribute to
(Redirected from Generation/Fourth)
Jump to: navigation, search

Generation IV in the Pokémon franchise, is a term used to describe the fourth set of games and Pokémon introduced into the series. The Generation IV games introduced a number of advancements including new Pokémon, moves and gameplay features. Chronologically, these games take place in the same timeline as Generation II. 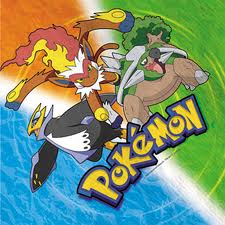 As with the other main series Pokémon games, a new set of starter Pokémon were introduced for the fourth generation. Continuing with tradition, these Pokémon are a Water-type, Grass-type or a Fire-type. They include Piplup (Water), Turtwig (Grass) and Chimchar (Fire).

In the Gold and Silver remakes, Pokémon HeartGold and SoulSilver, the starter Pokémon will remain the same. They include Totodile (Water), Chikorita (Grass) and Cyndaquil (Fire).

Generation IV introduced a new set of Gym Leaders and the Elite Four in the Diamond, Pearl and Platinum games. All of these trainers specialize in a specific type of Pokémon and are key to progressing through the game. The HeartGold and SoulSilver Gym Leaders, Elite Four and Champion will remain the same as their predecessors.

In Pokémon Diamond, Pearl and Platinum, the Pokémon Champion is Cynthia, a woman that helps the player on various occasions. The Champion in HeartGold and SoulSilver remains the same as Generation II, which is Lance, a former member of the Elite Four and the man who helps you take down Team Rocket.

In Pokémon Diamond, Pearl and Platinum, the main antagonist is Team Galactic, whose objectives is to create a new world.

In Pokémon HeartGold and SoulSilver, the main antagonist is Team Rocket. They want to re-assemble their organization after Giovanni disbanded it after being beaten by Red.