Gary's Umbreon is a Pokémon that Gary evolved from Eevee in Johto. 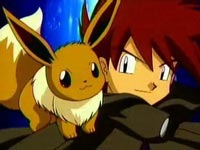 Umbreon as an Eevee

Gary's Umbreon first appeared as an Eevee where it battled Ash's Pikachu shortly after Ash won the Orange League. Eevee defeated Pikachu without too much effort.

When it next appeared, Eevee had evolved into Umbreon and was used to battle an Alakazam who it defeated without taking any damage. Ash wanted to challenge Gary and his Umbreon but Gary refused.

For some reason, Gary did not use Umbreon against Ash in the Silver League Conference.

Umbreon was one of Gary's favourite Pokemon and stayed with him through his journey in Sinnoh. It once battled Ash's Gligar in a brief practice battle shortly before Gary gave Ash a Razor Fang in order to get Gligar to evolve. Umbreon was also used when Gary encountered Team Galactic. Along with Gary's Electivire it challenged Saturn's Toxicroak but Toxicroak was too fast, even for Umbreon, and defeated Umbreon and Electivire.