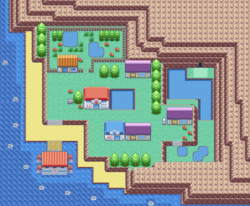 Four Island, officially known as Floe Island, is the smallest of the Sevii Islands and has no routes. It is also Lorelei's hometown. In FireRed and LeafGreen, the Daycare is located here, as well as Icefall Cave. Next to the Poke Mart, there is a house where a man who will put stickers on the player's trainer card if they beat the Elite Four, hatch an Egg, or do link battles. To reach Four Island, the player must have the Rainbow Pass, instead of a Tri-Pass.