"I'm Falkner, the Violet City Pokémon Gym Leader! People say you can clip Flying-type Pokémon's wings with a jolt of electricity... I won't allow such insults to bird Pokémon! I'll show you the real power of the magnificent bird Pokémon!"
— Falkner, Pokémon HeartGold and SoulSilver

Falkner (Japanese: ハヤト Hayato) is the Gym Leader of the Violet City Gym in Johto. He specializes in using Flying-type Pokémon and, when beaten, will reward the player with the Zephyr Badge, which allows for the TM Flash to be used outside of battle. He is the first gym leader in Johto. Also, the player will be able to use the HM Rock Smash, even when outside of battle. 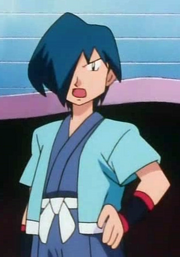 Falkner from the Anime

In the Johto region, Falkner's title is "The Elegant Master of Flying Pokémon". He inherited the Violet Gym from his father, who is never seen but said to be traveling. Falkner is seen as a cool and handsome Trainer, but it is said that his father is even more cool and more handsome. He tends to brag about his father, as seen in the Generation II remakes. Falkner defends the Violet Gym using his father's cherished bird Pokémon, and strives to be the greatest bird master.

In Gold, Silver, and Crystal, his gym is fairly simplistic, filled with bird cages. In addition to the Zephyr Badge, Falkner awards TM31, Mud-Slap, to those Trainers that manage to defeat him. In HeartGold and SoulSilver, his gym is remodeled. He and his trainers are located high above ground level.