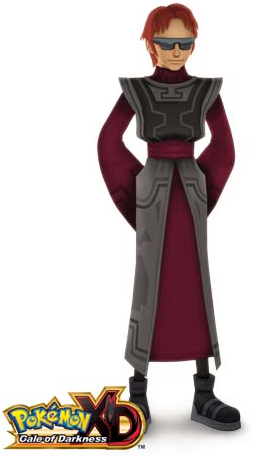 Eldes as he appears in Pokemon XD: Gale of Darkness

Eldes is the 2nd admin of the Cypher Organization and is the youngest son of Grand Master Greevil. Eldes doesn't have the mentality support the Shadow Pokémon process, but does it anyway to keep his father happy. At the end of the game when the player, Michael, beats Greevil, Eldes talks Greevil into canceling the Shadow Pokémon project, and he, his older brother Ardos, and Greevil disappear. However, Eldes later on appears again in the Orre Colosseum with a team of Latios, Latias, Gengar, Metagross, Tauros, and Snorlax.