From the Azurilland Wiki, a database for the Pokémon series that anyone can contribute to
Jump to: navigation, search
← Fearow | Ekans | Arbok →

Ekans (pronunciation: EK-uhns) is a Poison-type Snake Pokémon introduced in Generation I.

Ekans is a snake-like Pokémon with purple and yellow coloring. Its underside leading to its tail is yellow, and it has a yellow rattle at the tip of its tail. Ekans have large yellow eyes with slit reptilian pupils. Across its neck is a large yellow band.

Ekans, like real snakes, have the ability to unhinge their jaws, giving them the ability to swallow prey whole such as Pidgey, Spearow or their eggs. Ekans also share other characteristics with snakes, such as using its tongue to test the air for the presence of prey and shedding its skin. An ekans will lose its rattle once it evolves into Arbok.

Ekans evolves into Arbok at level 22. 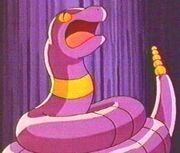 Ekans first appearance in the anime was in the episode Pokémon Emergency!, where it was revealed to be Jessie's Pokémon.

Ekans was widely known for being under the ownership of Jessie, a member of Team Rocket, who had received it on her birthday. It later evolved into an Arbok in the episode Dig Those Diglett!, and was released in the episode A Poached Ego. It was seen in 12 episodes as an Ekans! Those would be; Pokemon Emergency, Ash Catches a Pokémon, Challenge of the Samauri, Clefairy and the Moon Stone, The Path to the Pokémon League, Pokemon Shipwreck, The Island of Giant Pokémon, Beauty and the Beach, The Ghost of Maiden's Peak, Primeape Goes Bananas, Pokemon Fashion Flash, and Dig Those Diglett.

Ekans also made a cameo in "Pokemon The Power of One where it was seen swimming with Water-type Pokémon.

An Ekans with Team Meanies

An Ekans also appeared in "Team Go-Getters out of the Gate!" as a member of Team Meanies.

Ekans later evolved for Jessie just to make her happy.

Ekans appears to be based on a snake.

Ekans' English name is the word "snake" spelled backwards. Its Japanese name, "Arbo," is the backwards spelling of "cobra" without the "c".