Duplica (Japanese:イミテ Imite) is a Pokemon Trainer that specializes in training Ditto and impersonating others. Duplica first appeared in episode 37: Ditto's Mysterious Mansion.

While Ash, Misty and Brock traveled on their way to the next gym, it started raining heavily. To escape the rain, they ran into what they thought to be an abandoned house. While taking cover there, they see a Pikachu with a strange face. Ash was determined to catch this new pikachu and tried to throw a Poké Ball at it, but the Poké Ball bounced back when someone hit the Poké Ball with their own Poké Ball. Then, a girl walked out from the shadows, dressed exactly like Ash. She explains to them that they are in the House of Imite, where she and her ditto put on shows by dressing up as other Pokémon. The "pikachu" then transformed back into a Ditto, showing it's true form. After Ash learned that Ditto could only learn one move (Transform), he called it boring, which angered Duplica and caused her to challenge Ash to a Pokémon battle.

He accepted and chose Bulbasaur as his Pokémon, whereas Duplica chose her Ditto. Ditto transformed into Bulbasaur and grabbed Bulbasaur with a Vine Whip, causing it to be useless, therefore, Ash had to give up. As Ash was depressed over his loss and wondering how the original could've lost, Duplica escorted everyone to the dress-up room where she entertained them by dressing up as Nurse Joy, Officer Jenny, and Misty. After having fun in dress-up room, Duplica explains to everyone that she wants to become a Ditto master, but it seems impossible because her Ditto can't seem to pull off imitating another Pokémon's face, therefore, it keeps it's plain, small black eyes and wide mouth. She even had a flashback to when she was trying to perform to a crowd, but when Ditto couldn't pull off a transform move, everyone booed and left. From then on, she had continued to train her Ditto so it could transform completely. 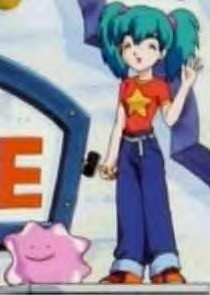 Suddenly, after this, the lights go out and a spotlight shows on Jessie, James, and Meowth. They successfully grab Ditto and escape. Duplica, Ash, Brock, and Misty all chase after them and eventually find them. They perform their entrance by imitating the Team Rocket catchphrase while cosplaying as Jessie and James. This angers Jessie and James and James even yells at them for getting one of the lines wrong because they said to "to ignite all people within our nation" instead of "to unite all people within our nation." The kids are distracted for a moment and giggling about how fun doing the catchphrase was, but quickly turned their attention back to Team Rocket. They ask for Ditto back, but cannot tell the difference between Ditto and Meowth because Ditto finally learned how to transform perfectly (later on Duplica thanked them for teaching Ditto). Team Rocket takes this chance and purposefully gives Duplica Meowth instead of Ditto. Duplica then ran after them and screamed that they still had her Ditto, showing that she could tell the difference between them.

She throws Meowth at the balloon. Then Ditto bites Jessie's hand, which causes her to let go of Ditto. Ditto then flies back down to Duplica. Duplica then ask Ditto to transform into a mini cannon and Ash order Pikachu to enter it. After Pikachu send flying toward Team Rocket's ballon, it uses Thunderbolt on the balloon and causes Team Rocket to "blast it off again." Ditto then transformed into Pikachu and Ash became confused and said he couldn't tell them apart. Duplica then picked up her Ditto and it transformed back, Duplica explained that she could always tell which one was her Ditto. Ash, Misty, and Brock then bid farewell to Duplica since it had stopped raining and wished her luck at becoming a Ditto master.

A few seasons later, Ash, Misty, and Brock stumble upon a Pokémon Center where they can rest up, however, when they get there, they see that Nurse Joy isn't there. A girl from the shadows comes out, dressed up like Nurse Joy, and says that Nurse Joy is in the medical room, doing a check-up. Ash and Misty just assume that two Nurse Joys are working at this Pokémon Center, but Brock says that she wasn't Nurse Joy and that she was an imposter. The girl then says that she could never fool Brock and takes off her disguise to reveal that she is Duplica.

The old friends catch up while resting at the Pokémon Center, and Duplica tells them that she is there because there's a Pokémon Performance Competition that she was invited to perform in with her Ditto. She then tells them that she has caught a new Ditto since their departure, however, just like her first Ditto, this new Ditto also has a problem with transforming. The problem is that this Ditto, nicknamed "Minidit," can only transform into smaller versions of big Pokémon. Duplica sees this as a problem and wants to fix it, but Nurse Joy tells her that nothing is wrong with her Ditto, therefore, it should be fine. Later, Jessie and James see Minidit and hatch up a plan to steal it so that they can make it transform into a little Arbok, sell it to someone for a powerful Pokémon, then steal Minidit back and repeat the process. They successfully steal Minidit and make it transform into a mini Arbok and try to sell it to a crowd of people. Ash and his friends quickly catch word of this and go to see if it's Minidit. Duplica (although she has gloated about being able to tell her Ditto from any other Pokémon before) can not tell if this small arbok is her Minidit or not. Meowth then loses his patience and talks, giving away Team Rocket's identity. Ash and Duplica then use Pikachu and the two Dittos to blast away Team Rocket. At the end of the episode, Duplica comes to terms and accepts Minidit's condition, she then makes a vow to capture different Dittos, each with their own way of transforming, and create a team of Dittos This was the last time Duplica was shown in the series. 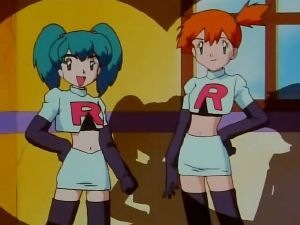 Duplica and Misty cosplaying as Jessie

Although Duplica cosplays often, her main outfit is a red shirt with a yellow star on it and a pair of blue jeans. She keeps her blue-ish green hair in two pigtail-plants. She is able to change her hair and voice at any time to imitate someone. She has also been in the imitating buisness for so long that she is able to change in a flash. This was proven when she was in the dress-up room with everyone and she was able to change just by running behind a shelf of clothes. She was able to cosplay as three different girls in under ten seconds. When Duplica cosplayed as Ash, she copied everything about him perfectly, even the way he throws his Poké Balls. This may reveal that she can pick up on every quality of a person in just a matter of seconds, especially since in the first five minutes that Ash was in the House of Imite, Duplica had already managed to make a perfect cosplay of him, and she could already imitate the way he talked.