From the Azurilland Wiki, a database for the Pokémon series that anyone can contribute to
Jump to: navigation, search
← Reuniclus | Ducklett | Swanna →

Ducklett (Japanese: コアルヒー Koaruhii) is a Generation V Water/Flying-type Pokémon. It evolves into Swanna at level 35.

Ducklett looks like a cygnet or baby bird Pokémon. Its upper body is aqua/light blue in color and the lower half is sky blue. On its head is a heart-shaped, feather-like protrusion. Its bill and feet are yellow. 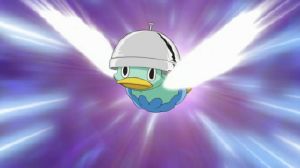