From the Azurilland Wiki, a database for the Pokémon series that anyone can contribute to
Jump to: navigation, search
← Dratini | Dragonair | Dragonite →

Dragonair (Japanese: ハクリュ Hakuryū) is a Dragon-type Pokémon introduced in Generation I.

Dragonair's appearance are like sea serpents with long, sleek, bodies. The upper part of their body is light blue while its underside is white. They have a small, white horn on the forehead and two wing-shaped protuberances on the sides of the head which are often said to be ears, but are in fact wings, as evidenced in the short film preceding Pokémon: The Movie 2000. They have a blue orb placed at the neck and another two near the tip of the tail.

Dragonair live in the bottoms of many lakes, but they usually never come to the surface.

The shiny Pokémon version of Dragonair has lavender pink colored skin on its upper body as opposed to light blue skin.

Dragonair's in-game ability is shed skin. This ability allows a one in three chance, every turn, that an inflicted status effect will be dropped. In addition to this, there are some abilities a Dragonair possess that have been shown in other media.

They can store an enormous amount of energy inside their bodies which seems to manifest itself in two distinct fashions. First, even though they lack large wings, Dragonair has been shown flying with and without the wings on the side of the head greatly enlarged.

Dragonair can also discharge energy through the orbs to envelop itself in a gentle aura. This aura, which makes its body shine slightly and gives it a mystical appearance, and is said to enable the Dragonair to control the weather in the immediate area and change it in a matter of minutes.

Dragonair evolves from Dratini at Level 30 and evolves into Dragonite at level 55. 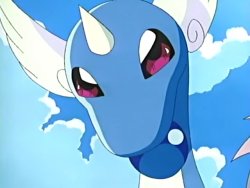 Dragonair in its third anime appearance

Dragonair have been shown three times in the anime, the first of which being (ミニリュウのでんせつ) or The Legend of Miniryu. Though American audiences never got to see this one due to its ban for the use of handguns.

Its third and latest appearance is in the episode On Olden Pond. It is seen near the episodes end, rescuing a man.

In Pokemon Adventures, Lance used his Dragonair to whip up a storm and ruin the surfing contest. The thing that makes this Dragonair different though is that it has been trained so well it can use its horn to control the weather.