Dragon Rage is a Dragon-type move introduced in Generation I that will perpetually inflict 40 HP damage on the opponent. In the Pokémon Mystery Dungeon series, this attack will always inflict 65 HP damage, instead of 40. 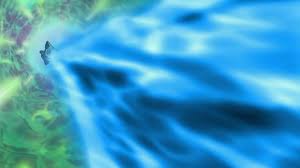 Dragon Rage, when used by Axew , is blueish in colour and is loaded in a way similar to Draco Meteor . It resembles Flamethrower, as a fire-like blast is shot towards an opponent.

Axew had difficulty in learning Dragon Rage, with Ash and Cilan teasing Iris by caling the move "Dragon Sneeze". This difficulty implies that Dragon-type moves take a lot of practice before being mastered.