From the Azurilland Wiki, a database for the Pokémon series that anyone can contribute to
Jump to: navigation, search
← Lapras | Ditto | Eevee →

Ditto (Japanese: メタモン Metamon) is a Normal-type Pokémon introduced in Generation I. Ditto are unique, as their only attack is Transform. They use this attack to copy the stats (except HP), moves (only 5 power points), types, and the appearance of the opponent. Another reason that they are unique is that Ditto can breed with any Pokémon in a Day Care Center regardless of its gender, except other Ditto. 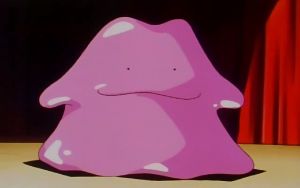 Ditto in the anime

Ditto's appearance is very plain. It is a simple pinkish purple, amorphous blob, though it can be changed via Transform. A shiny Ditto is blue as opposed the normal purple. Ditto's cry is also known to be the same as Poliwag's cry in the game series.

Ditto's first appearance was on IL037 wherein a Trainer named Duplica owned one.