From the Azurilland Wiki, a database for the Pokémon series that anyone can contribute to
Jump to: navigation, search
← Venomoth | Diglett | Dugtrio →

Diglett (Japanese: ディグダ Diguda) is a Ground-type Pokémon introduced in Generation I.

Diglett are small, brown moles with two small eyes and a large pink/red nose. Since part of its body is underground, we don't know whether or not Diglett has feet, tail(s), etc. However, in Pokémon Mystery Dungeon Red Rescue Team and Blue Rescue Team, the rescued Diglett (after Skarmory kidnapped him) claimed to say his feet were getting cold (Which thereafter caused an awkward moment of silence).

Diglet live only a few feet underground, and feed on plant roots. It burrows through the ground at a shallow depth, leaving raised earth in its wake, perfect for planting crops. Diglett are frequently kept on farms for this reason. Diglett has very thin skin, and thus if Diglett is exposed to light its blood will heat up, causing it to grow weak. This weakness to heat causes Diglett to prefer dark places, sticking its head up only when the sun is not bright. Otherwise, it pops up in caves. Diglett make their homes in tunnels and caves under the earth, most of which are made by burrowing Onix.

Diglett can have the ability Sand Veil or the ability Arena Trap. Sand Veil increases Diglett's evasiveness when a Sandstorm is out. Arena Trap prevents any Pokémon from escaping it in battle. Diglett are proficient diggers and can Dig quickly.

Diglett are a tanish brownish color, with big, pinkish-reddish noses. 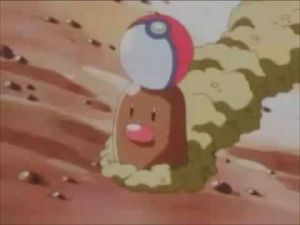 A Diglett from episode 31, Dig Those Diglett!

In the anime, Diglett first appeared in Dig Those Diglett. They were causing trouble for a construction crew that planning on building a dam. The foreman insisted that the Diglett were to be exterminated, but the Pokémon of the trainers that happened to be in the area refused to fight them. The reason was that the Diglett and Dugtrio were helping to plant trees in the forest. Diglett were also used by a man named Poncho in The Underground Round-Up. He used them to dig tunnels underground of a town that was infested with Electrode. The tunnels sent the Electrode to an open field where they'd live in peace. Diglett were also featured in Plant It Now...Diglett Later!, helping villagers with crops and being the apparent target of some thieves.

In the Pokémon Adventures manga, Diglett makes a cameo in Raging Rhydon as wild Pokémon of Mt. Moon. Red also owns a Diglett that he uses against Eevee.

Diglett evolves into Dugtrio once it reaches level 26. 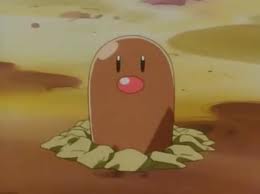 Diglett in the anime