From the Azurilland Wiki, a database for the Pokémon series that anyone can contribute to
Jump to: navigation, search
← Azelf | Dialga | Palkia →

Dialga (Japanese: ディアルガ Diaruga) is a Steel/Dragon-type Legendary Pokémon. Dialga is known as the temporal Pokémon, and serves as the Version Mascot for the game Pokémon Diamond.

Dialga is a sauropod-like Pokémon. It's mainly dark blue with some gray metallic portions, such as its chestplate, which has a diamond in the center. It also has various light blue lines. It has a somewhat wing-like structure on its back, and a crest on its head, resembling a type of dinosaur. Dialga also has two horns on top of its head, two fang-like horns around its mouth, long claws, and a short tail. 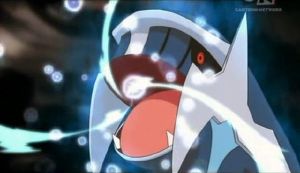 Diamond and Pearl face off against Dialga and Palkia.

In the manga, Dialga is being controlled by Cyrus and the red chain. Dialga uses it's ability to control time for battling.

Dialga has the ability Pressure, which causes the opposing Pokémon to use twice as much PP for every successful hit.

Additionally, Dialga has the ability to control time. Dialga, like many other Dragon type Pokémon, can use many various elemental attacks. It is also one of the few Pokémon that can learn the move Aura Sphere. Capturing it gives you an item called the Adamant Orb, which powers Dialga's attacks.

Dialga is the only Pokémon that can learn the move Roar of Time, its signature move, aside from the special Event Pokémon Darkrai given in the Tenth Movie and in the Toys R' Us Nintendo World Tour, the Pokémon Smeargle, who can Sketch the move, Pokémon with Metronome, a Pokémon using Mirror Move immediately after Dialga uses the move, and a Level 100 special Event Arceus.

Dialga does not evolve.

Following the trend of the Pokémon Ruby/Sapphire games, Dialga is fought as part of the game's storyline.

After chasing Team Galactic through Mt. Coronet in Pokémon Diamond, the player ends up on the summit, also known as Spear Pillar. When there, Cyrus will use the Red Chain he crafted from Uxie, Azelf, and Mesprit to call up Dialga. After defeating Cyrus, the Dialga seemingly waits to battle the player. As is with other Legendary Pokémon, this is not the only opportunity to encounter it. After defeating the Elite Four and Champion Cynthia, you may go back to the same spot and rebattle it.

Dialga does not appear in the game, but is listed in the Pokédex.

After the player beats the game, Dialga, along with Palkia, can be caught at the Spear Pillar, but only with the Adamant Orb in your bag, which can be obtained from an old lady.

If you have an Arceus in your party, you can obtain either a Dialga, Palkia, or Giratina at Sinjoh Ruins.

If you have an Arceus in your party, you can obtain either a Dialga, Palkia, or Giratina at Sinjoh Ruins. 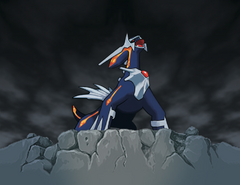 In the Pokémon Mystery Dungeon: Explorers of Time & Explorers of Darkness games, Primal Dialga is the main boss of the game and is found at the end of chapter twenty. After finishing the main storyline, the player can choose to fight Dialga and have him join their team. Dialga is seen using Roar Of Time on Sharpedo bluff in the opening. In the beginning of the future, a silhouette of Dialga with glowing red eyes will appear in the Pit. Later he is seen on closeup. He uses Roar Of Time ( In the same animation as the intro ) to turn into something. Much later, you are knocked away. An awful form of Dialga—Primal Dialga—appears. He challenges you and you fight him as the final boss. He appears in his Normal Form after you revive yourself. He says he "seeks the repair of Temporal Tower". After the credits, he once again uses Roar Of Time. This time to restore the player to the timeline as thanks for saving him from remaining as Primal Dialga forever. Dialga will eventually help your partner by bringing you back to life.

Dialga appears in the game Super Smash Bros. Brawl, seen in the background of the stage Spear Pillar. It interacts with the stage in various ways including slowing down time, distorting the stage itself, and attacking the players.