From the Azurilland Wiki, a database for the Pokémon series that anyone can contribute to
Jump to: navigation, search
← Oshawott | Dewott | Samurott →

Dewott (Japanese: フタチマル Futachimaru) is the Water-type Starter Pokémon of the Unova region, evolved from Oshawott. 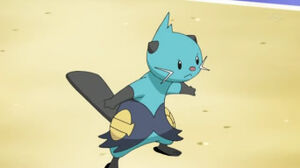 A Dewott in a battle in the anime

Dewott is an otter-like Pokémon that is light blue with a navy blue "apron" around its thighs that carries two scalchops. It has four white whiskers and a platypus-like tail and small black ears. It also bears a similarity to Marshtomp in regards to color, whiskers, and the scalchops on its legs.

A Dewott was seen in episode 4 of Pokémon Best Wishes when it was battling another trainer's Servine and ironically won, despite Servine having a Type Advantage. It then battled Ash's Pikachu, but the battle was interrupted.

Cilan's rival Burgundy owns a Dewott, as seen in Episode 19. However, it lost to Cilan's Dwebble in battle.