From the Azurilland Wiki, a database for the Pokémon series that anyone can contribute to
Jump to: navigation, search
← Manaphy | Darkrai | Shaymin →

Darkrai (Japanese: ダークライ Daakurai) is a Dark-type Mythical Pokémon. Cresselia serves as Darkrai's counterpart, and together they form the Lunar Duo.

The top of its body is connected to the lower half by a tiny waist, giving it an hourglass-shaped figure. It has a red spiky growth around its neck and a long white mane flows from its head, obscuring one of its blue eyes. Its thin arms have three claws each, with three spiky protrusions above each elbow. Its shoulders also have long tatters and it appears to be wearing an old ripped cloak or dress. It is able to extend stilt-like extensions to use as "legs". Darkai resembles a ghost or a haunted spirit. It's apperance suits its ability to give people nightmares. 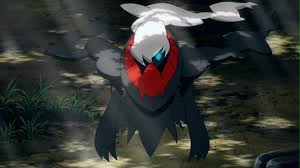 Darkrai as seen in The Rise of Darkrai

Darkrai first appeared in the Pokémon movie The Rise of Darkrai. It was seen protecting Alice, whose grandmother Alicia had been kind to it in the past. It then intervened in the cosmic conflict between Dialga and Palkia. It also makes a cameo appearence in the end credits for Arceus and the Jewel of Life, along with Shaymin.

Darkrai next appeared in "Sleepless in Pre-Battle", which was its anime debut. It caused nightmares, much like it can in the games. It was concealing itself when Cresselia used its abilities to reveal it from the darkness. The two then battled and Darkrai hid itself once more in the shadows. In its debut movie "The Rise of Darkrai" Darkrai usually hovers above the ground, but it can sprout long thin legs with which it can walk around like a person.

Another Darkrai appeared under the ownership of a trainer who competed in the Sinnoh League named Tobias in DP episode 183.

Darkrai does not evolve.

Darkrai first appeared in the Generation IV games Pokémon Diamond and Pearl. To obtain it, a player would have had to receive a Mystery Gift during a special promotion. It is also obtainable by using a cheat device to either receive the Mystery Gift or walk to the island it is located on.

In Pokémon Ranger: Shadows of Almia, Darkrai featured in a special mission named "Liberate the Tower". You find it where Darkrai helped you before. However, this time it helps you, and uses it's ability, Dark Power, to fend off Team Dim Sun. However, the mission is no longer available for download. It was possible to send Darkrai to Pokémon Diamond, Pearl, and Platinum.

In Pokémon Mystery Dungeon: Explorers of Time & Explorers of Darkness, (spoiler alert) it is found out that Darkrai was the reason that the Hero was turned into a Pokémon and lost his/her memory when he/she had gone back in time with Grovyle to stop the tower of time from breaking and causing Dialga to turn into Primal Dialga. After the final battle against Darkrai, he attempts to escape in a time portal, when Palkia, who is angered that Darkrai used him, shows up and destroys the time portal as Darkrai is halfway through it, and, although he got through the portal unharmed, causes Darkrai to lose his memory and get banished to an unknown place (which is ironic seeing how he was the reason that the hero lost his/hers.)

In the Pokémon TCG[edit | edit source]