May in new outfit

The characters, Brock, Ash and Dawn, is waiting at the dock near Lake Valor while waiting for their old buddy, May, to reach the dock. A Beautifly appeared from the sea and land on Ash's head, followed by a ship with May aboard on it. May steps down the ship and chat about her past experience.

When Ash asked her why she was at Snowpoint City, she released her new Pokémon, Glaceon and showed off to her friends. She explained that she wanted a evolved Pokémon so that she can come home with an evolved Pokémon from Sinnoh. She said that she brought her Eevee to a cave in Snowpoint City and which consists of Ice Rock, which allows Eevee to evolve into a Glaceon. She also shows her three Johto ribbons. She also revealed his brother Max's life, he takes care of his Dad's Pokémon after learning the breeding techniques from Brock. She also revealed that Drew and Harley have been working very hard for the contests. Drew's Roselia has evolved into a Roserade.

May booked a reservation at a seven-star restaurant for four people in Lake Valor, the best restaurant in Sinnoh. As they went in, the Team Rocket, with a growling stomach, felt jealous about it.

Before they can eat in the restaurant, they have to have a tag-battle with two well-dressed Roman and Kylie. If Ash and his team wins, they will be able to eat. Ash then complained about his empty stomach.

Ash and Brock were one team and battle with the Roman and Kylie. Brock uses his Sudowoodo and Ash sends out his Pikachu. Roman sent out Snorlax and Carly sent out Munchlax. Snorlax use Mega Punch while Munchlax use Giga Impact. Brock commands his Sudowoodo to use Double-Edge on Munchlax and Ash commands his Pikachu to use Volt Tackle on Snorlax. Both Munchlax and Snorlax fainted with just one hit.

Then it is May and Dawn's turn to battle with the Roman and Kylie again. May choose her Blaziken, and Dawn choose her Piplup. Kylie choose Driftloon while Roman choose Girafarig. 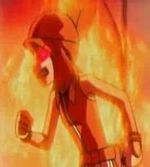 Just when they are going to start battling, the door in front of them explodes and smokes coming out. A waiter came out and shouted that all their food is stolen. May then exploded in rage, and her whole body was "engulfed in flames". Dawn even commented her that she had turned into a "Fire-Type". 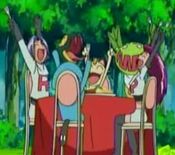 Munchlax leads the group to where Team Rocket were and May became angry. The Team Rocket then quickly eat finish the food, which made May exploded in rage.

Then Team Rocket spoke their motto, then guarded the refrigerator.

May then used her Glaceon and Dawn used her Buneary. Jessie responds by sending her Seviper to use Poison Tail and James commands Carnivine to use Bullet Seed. Glaceon and Buneary used Ice Beam together, and froze Team Rocket.

Glaceon then sends the frozen Team Rocket up into the air using Iron Tail, and was finished off by Buneary, using Bounce and hit the Team Rocket towards the sky. Then the Team Rocket says, "We're blasting off again!"

The group returned to the restaurant. In order to show appreciation, Kylie said that they could eat without the need to battle. But the chef said he have to prepare the food. So May and Dawn decides to battle again anyway.

This time, Driftloon and Girafarig is stronger than their Pokémon in the previous battle. Girafarig used Bite and bit Blaziken's foot. Driftloon then used Constrict, trapping Piplup at its feet. After that, Piplup used Whirlpool on Driftloon above him and Driftloon is trapped in the vortex. Piplup's Whirlpool also trapped Girafarig, and sends them up to the air. 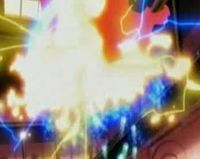 May then tells Dawn to commands Piplup to use Bubblebeam on their opponent's Pokémon while on air. Piplup then spins on its feet while using Bubblebeam, and Blaziken then use Fire Spin on it, which cause a spectacular effect of the combination of Water-type moves and Fire-type moves. May and Dawn won.

After eating, Ash's team went to a balcony at the Pokémon Center and view the Lake Valor's Contest Arena. May then shows her ribbon, which was torn into half. The other half is with Ash, and May talked about her experiences of winning the ribbon. Dawn then shows her ribbon which her Mom give, and talk about it too.

When May found out that Ash is entering the contest too, May is then a little surprised. When she asked Ash why, Ash replied that Wallace told him to compete in the Wallace Cup with his Buizel. Then May got very surprised, and said "Wallace told you himself?"