Garchomp was Cynthia's most powerful Pokemon. She debuted in Top-Down Training, where she battled Lucian's Bronzong and won, blocking Flash Cannon with one of her fins and then defeating Bronzong with an incredibly powerful Giga Impact, which normally would not do much damage to a Steel type. 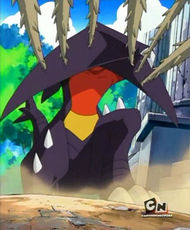 She also battled against Paul in the same episode, knocking out Chimchar, Weavile, Murkrow, and even Pauls most powerful Pokemon Torterra. She defeated each of them with just one attack and endured Weavile's super effective Blizzard with astonishing ease. Garchomp showed the ability to block Flash Cannon and even Frenzy Plant by using her fins as a shield.

Garchomp later appeared when Cynthia was challenged by Aaron battling his Drapion. Whether she won or lost this battle is unknown.

Garchomp also helped battle Team Galactic on two occasions, first when attempting to stop them from stealing the Lustrous Orb and later when preventing them from taking over the Pokemon universe by using the powers of Dialga and Palkia.

Garchomp also battled Flint's Infernape when Flint challenged Cynthia for the title of Sinnoh League Champion. Infernape dodged Garchomp's Draco Meteor and attacked with Close Combat. Garchomp smashed Infernape to the ground with Brick Break and then Infernape struck back with Mach Punch before using another Close Combat. Garchomp retaliated with Stone Edge and then intercepted Infernape's Flare Blitz with Dragon Rush creating a huge explosion. When the smoke cleared, Infernape collapsed and Cynthia was announced the winner.

Garchomp also appeared when Cynthia traveled to Unova where she battled Iris' Axew, taking Axew's Scratch and blocking Dragon Rage before almost knocking Axew out with Dragon Rush and Draco Meteor. Axew learned Giga Impact during the battle and actually managed to knock Garchomp off her feet which was quite remarkable especially when one considers the fact that Axew was only in its first stage of evolution. However Garchomp quickly recovered and would have defeated Axew with Brick Break if Cynthia hadn't called her off at the last moment.