"In that case... I can battle without a worry!"
— Crystal in Pokémon Adventures: Volume 10

Crystal, or Crys, is a Pokedex Holder in the Pokémon Adventures Manga. Crystal comes from Violet City and was born on the 30th of April, with blood type A.

As a child, she had a bad fall resulting in her arms breaking, and learned how to kick Poké Balls with her feet to capture a Pokémon.

Crystal's special skill, as described by Professor Oak, is capturing Pokémon. To this extent, Crystal is referred to as The Catcher.

Just like most characters in the manga, who are based off of the main characters from the games, Crystal is based on the female character of Pokémon Crystal and is slightly based off Lyra from Pokémon HeartGold and SoulSilver.

She has been shown to be good at catching Pokémon as she helps Professor Oak in the lab to study, and is mentioned to have captured all non-legendary Pokémon for Professor Oak to study. She later starts to work full time as one of Oak's assistants.

Crystal prefers to use only a select team of Pokémon, so she usually catches Pokémon for others, such as Prof. Oak. She can only afford to take strong Pokémon with her on her journey, so she is very selective on which Pokémon she takes on her team. All of the Pokémon from her team have a star somewhere on their body, so as to not confuse them with wild Pokémon of the same species. She has caught at least one of every Pokémon in the Kanto and Johto regions (except for the Legendary Pokémon) for Prof. Oak, but only 26 of those Pokémon have ever been seen or mentioned. 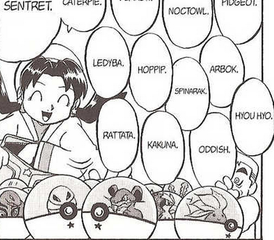