From the Azurilland Wiki, a database for the Pokémon series that anyone can contribute to
Jump to: navigation, search
← Roserade | Cranidos | Rampardos →

Cranidos (Japanese: ズガイドス Zugaidosu) is a Rock-type Pokémon and a Fossil Pokémon, able to be revived from the Skull Fossil.

Cranidos is a short, bipedal, dinosaur-like Pokémon. It is very similar to the real life Pachycephalosaurus, having long hindlimbs and short forelimbs, and also having an extremely thick skull roof. The front of Cranidos' body is largely gray, while it's back and the top of its head are blue. From the sides to the back of its head are four large spikes. Cranidos' most notable feature though, is the large blue dome that is its head that it can use to smash down rocks or trees. 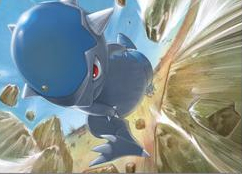 Cranidos is one of three Pokémon to have the ability Mold Breaker. This ability allows Cranidos's moves to strike through any opposing abilities. Cranidos also have incredible leg strength, allowing it to move at great speeds so as to hit its opponent. Cranidos's dome-like head is noted as being as hard as iron, making it capable of even breaking through rock.

Cranidos has had a large role as Gym Leader Roark's key Pokémon. He used it in a battle against Paul in Shapes of Things to Come, and against Ash in A Gruff Act to Follow.

During a battle with Team Rocket, in the episode Wild in the Streets, Roark's Cranidos evolved into a Rampardos. 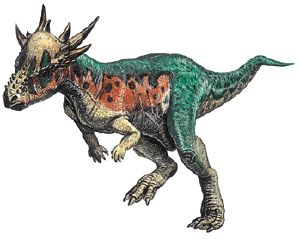 Cranidos's appearance is very similar to the Pachycephalosaurus dinosaur, and is the basis of this Pokémon's looks and abilities.