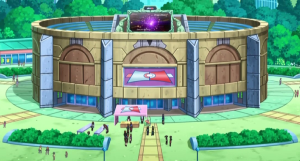 The Clubsplosion (Japanese: ドンナマイト Donamite) is an anime-exclusive, 16-participant, 4-round tournament held in Ambiga Town annually by Don George and Freddy O'Martian that took place in the anime between BW072 and BW075. The tournament is meant for Fighting-type Pokémon, but Pokémon of other types are permitted as well. The champion receives a year's supply of vitamins.

Each competitor participating in the tournament is permitted to use one Pokémon; battles are randomly decided by a computer. Montgomery was the previous year's champion, but Stephan took the title from him the year Ash & Co. participated in it.