"Wahahah! So you've come this far! Let me tell you, I'm tough! My Pokémon will crush stones and shatter bones! Watch this! Urggh! Oooarrgh! There! Scared now, are you? What? It has nothing to do with Pokémon? That's true! Come on. We shall do battle!"
— Chuck, Pokemon Gold, Silver and Crystal. 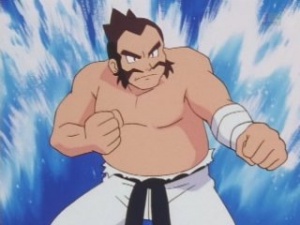 Chuck in the Anime
Chuck made his debut in JE093: Machoke, Machoke Man!. He was first seen training with his Machoke first on Defense then on Offense. He was so teary eyed when he said he was proud of Machoke's power. He then noticed Ash and went drill sergeant forcing him, Misty, Brock and Pikachu to march all the way to the gym.

When they arrived, Chuck was the last one to arrive because he was tired out. His students greeted him as the master and he revealed himself to be the Gym Leader. He says that eating is also part of training, but he can be sensitive about his weight when anyone, especially his wife, calls him "flabby".