From the Azurilland Wiki, a database for the Pokémon series that anyone can contribute to
Jump to: navigation, search
← Mew | Chikorita | Bayleef →

Chikorita (Japanese: チコリータ Chikoriita) is the Grass-type Starter Pokémon of the Johto region.

Chikorita evolves into Bayleef at level 16 and Meganium at level 32. 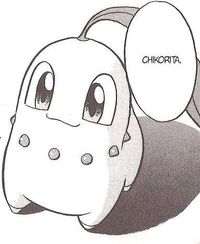 Chikorita in the manga

Chikorita are a small dinosaur-like Pokémon, particularly resembling a Sauropoda. They are a light green color and their eyes are bright red. Around its neck are tiny buds that have the ability to shoot out into long vines. Its most notable feature is the large leaf on the top of its head. They have short legs with one toenail on each foot.

Chikorita have the ability Overgrow, which allows the user to do 150% damage when its HP is equal to or below 30%.

Aside from this, Chikorita can use a few more natural abilities. Vines can be shot out of its neck from the tiny buds that circle it, and they can create a large number of leaves from the one large leaf on the top of its head. Chikorita's leaf on top of its head also has calming abilities.

Chikorita evolves into Bayleef at level 16.

Chikorita upset with Pikachu
Chikorita in the anime series is most notable for being one of Ash's Pokémon. Ash captured this Chikorita in the episode The Chikorita Rescue. Chikorita developed a sort of being jealous of Ash throughout the series, fighting for his attention, and even having a crush on Ash's other Pokémon such as Pikachu.

Casey also got a Chikorita as her Starter Pokémon.

It is also known that Lyra, a character from Johto who made her first appearance in Diamond and Pearl, also has a Chikorita.

Chikorita first appeared in the Gold and Silver games as one of the three starter Pokémon at the beginning of the game. At level 16 it can evolve into a Bayleef.

Chikorita, along with its evolved forms, is based off of the appearance of the Sauropoda dinosaur.

Chikorita's name is derived from the actual "chicory" plant.