From the Azurilland Wiki, a database for the Pokémon series that anyone can contribute to
Jump to: navigation, search
← Genesect | Chespin | Quilladin →

Chespin (Japanese: ハリマロン Harimaron) is a Grass-type Starter Pokémon for the Kalos Region. It first appeared in the Generation VI games, Pokémon X and Y. 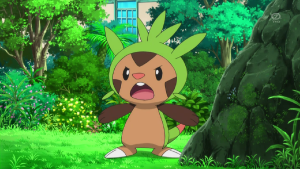 Chespin was first seen in A Battle of Aerial Mobility! under ownership of Professor Sycamore. It was then seen the following episode, A Shockingly Cheeky Friendship, when presented to Serena as a choice for a starter Pokémon.

Chespin seems to be based on a hedgehog.

Chespin's name is based on the words chestnut and pin.