This Parasect belongs to Cassandra and made its debut after evolving from Paras in IL044: The Problem with Paras. 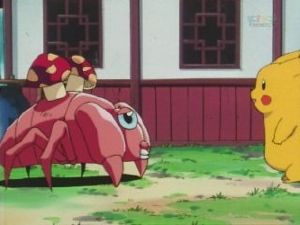 When it was a Paras it had little battling experience and was a wimp. It was not only scared to battle, it was beaten by the weakest versions of Pikachu's ThunderShock and Squirtle's Water Gun. Meowth took it under his wing and toughened up Paras. First it had a mock battle with Jessie's Arbok (which Meowth knocked out for Paras) then James' Weezing and Meowth surrendered after just one jab from Paras. When Ash and co. found it it was more confident than it was before, beating Pikachu (Who surrendered as well) and even managed to take down Ash's Charmeleon with one jab. Taking down a powerful opponent like Charmeleon caused it to evolve into Parasect, which used Spore to stop Charmeleon. It's only known move is Spore.