Carr is the Pilot of Ken, Al, and Harry of Team Rocket. He is very young and small to be part of Team Rocket but he is the best at being sneaky, mischevious, and lieing, even though he is a pilot. Carr buys a stock and now owns some of the organization. But Giovanni declined but Qoute: ( I could not get that greedy greedy little twerp out of that stock). And that is how he got a promotion by leaving the stock to get a promotion. The Pokémon he uses are Steel -type Pokémon. He has 11 forretress that he uses as bombs. They only know Explosion and one knows Spikes.

Carr can be briefly seen ushering in his takeover of Team Rocket before the new Rocket Executives, Archer, Ariana, Proton, and Petrel overthrow him, deeming Giovanni the only rightful leader of the organization as have happened in the past. 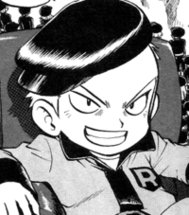 Carr after his promotion
Retrieved from "https://pokemon.gamepedia.com/index.php?title=Carr&oldid=352279"
Categories: