"Ah! That's Oreburgh Gym Badge! I see, I see! You've defeated my son. But that's no surprise. He still has much to learn. In place of my son Roark, I, Byron, will take your challenge!""
— Byron, Pokémon Platinum

Byron (トウガン Tougan) He is a Steel-type Gym Leader. He also serves as the Gym Leader for the Canalave City Gym, and is also the father of the Oreburgh City Gym Leader, Roark. Byron specializes in Steel-type Pokémon and holds the Mine Badge for the trainers that can defeat him.

Byron made his debut appearance in Ancient Family Matters! together with his son, Roark. It was revealed Byron had once been the Gym Leader of Oreburgh and had left his family to become the Gym Leader of Canalave as he was more interested in fossils, leaving his former position to Roark. Byron battles his son for a short time before the match got interrupted by Team Rocket. It was later revealed that Byron still cared for his son as he kept the fossil Roark had found as a child with him ever since. 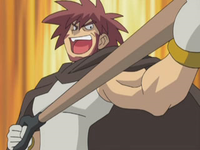 Byron is obsessed with digging and fossils. Because of such, he has a great admiration for those who craft eligant tunnels. When his fossils were stolen by Team Rocket in Ancient Family Matters!, Byron was too busy admiring the hole they dug (which came from three regions worth of experiance doing so) into the building to notice.

In Dealing With Defensive Types!, Ash had his gym battle with Byron, defeating him and earning a Mine Badge.

Byron first appeared in the Diamond and Pearl games as the Gym Leader of Canalave City. Upon defeating him, Byron will give the player the Mine Badge and TM91, which contains (Flash Cannon).

After defeating the regional Elite Four in Diamond and Pearl, Byron can be found in the cabin on Iron Island. After talking to him, he will give the player a Metal Coat.

There are several changes in Platinum Byron has a Magneton and the level of the Pokémon isn't the same.