Bugsy is the Azalea Town Gym Leader in the Gold, Silver and Crystal Chapter of Pokémon Adventures.

Bugsy's expertise in Pokémon stems from his control over Grass-type Pokémon. Exclusively in this manga, Bugsy is also known as a ruin explorer.

Bugsy is experienced in the use of Grass-type Pokémon, being the Gym Leader of Azalea Town. He is also known to make use of a Pokémon capturing net, manufactured for his sole use by Kurt. Bugsy is very knowledgeable when it comes to Grass-type Pokémon, as he was able to readily identify the type of Pokémon which manufactured the thread barring them off from the passageway in the Ruins. He also carries with him a staff that has a Poké Ball on its tip, useful in tight situations.

Bugsy is identical in appearance to his game counterpart. His appearance, as noted by Gold, highly resembles that of a girl. 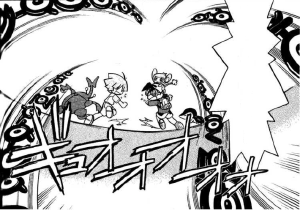 Bugsy and Gold flee from the swarm of Unown.

Bugsy first appears at the Ruins of Alph, where he is fervently searching for clues pertaining to his missing research team. It is here that Bugsy meets Gold for the first time, whereupon he is mistakenly identified as a girl. Bugsy corrects Gold, revealing that he is in fact a boy. When Gold hears voices emanating from behind one of the stone columns, he has his Explotaro burn it down, as Bugsy berates his careless nature. When Bugsy and Gold examine the ruins, he reveals that this chamber once held a mysterious symbol Pokémon. Bugsy is ecstatic about this discovery, as Team Rocket intervenes. He is surprised that Team Rocket is there, as he initially thought they had disbanded. When Gold gets tied up by the Grunts, he tells his Sunkern to use its Flash attack, which results in both the Grunts and Bugsy getting blinded. As the Rocket Grunts are temporarily incapacitated, the Unown emerge from the symbols on the wall, pursuing Bugsy and Gold.

As the two run through the labyrinthine passageways, Bugsy hears voices from within the wall calling for help. However, they find themselves trapped from both sides by the Unown and Team Rocket, who close in. Gold manages to defeat the Grunts with assistance from his Explotaro's Smokescreen, as Bugsy's research team members are all accounted for. Bugsy thanks Gold for his assistance, proclaiming that he will investigate the Unown and the Ruins of Alph further. Later, Suicune arrives at the Ruins of Alph, observing Bugsy's movements. The Unown visibly react to Suicune's presence, forcing Bugsy to capture one with his staff. Whilst walking through the Ruins, Bugsy notices a shadow lurking through the Ruins, promptly pursuing it. As Suicune makes its escape, Bugsy notices an Unown inscription on the wall, reading Escape Rope.

Suddenly, the rock face before him collapses, as Suicune begins to attack Bugsy. Bugsy retaliates with his Heracross, who is effortlessly hurled to the ceiling. He then uses his signature Pokémon-capturing net, enveloping Suicune. Bugsy believes that he has successfully captured Suicune, but it breaks free in a tremendous beam of light which envelops him. As the light recedes, Bugsy stares off into the distance, watching Suicune gallop away. He then notices that the Unown formations have again changed, this time reading Ho-oh. Later, Bugsy participates in the tournament pitting Kanto Gym Leaders with Johto Gym Leaders, facing off against Sabrina. However, Bugsy ends up losing to Sabrina.