Bruno is a member of the Elite Four and a primary antagonist for most of the Yellow Chapter of Pokémon Adventures.

Bruno is masterful with Fighting-type Pokémon. as he is able to give them new abilities through his rigorous training. For example, his Hitmonlee can stretch its leg like a spring.

Bruno is shown to have a kind personality towards both people and Pokémon, much unlike that of his Elite Four comrades. To this effect, Bruno was manipulated by Agatha into joining the Elite Four. Bruno is also compassionate to those who excel at fighting, namely Red. After Red achieved victory over Bruno, he thanked Red for the battle, leaving Cerise Island.

Bruno's strict training regime allows for his Fighting-type Pokémon to achieve new abilities not normally obtained. For example, his Hitmonlee can extend its leg like a spring. This trait makes Hitmonlee very evasive, as it is able to dodge all of Pika's attacks. Bruno's Onix is also shown to be highly resistant to Water-type moves, despite the obvious weakness. He also makes use of a nunchuk with a Poké Ball attached to the end of it. Bruno uses this nunchuk to increase his speed when summoning his Pokémon, a trait useful in the heat of battle.

Bruno is identical in appearance to his game counterpart.

Bruno and the rest of the Elite Four make brief appearances during the final battle between Red and Green at Indigo Plateau.

Bruno appears training with his Pokémon in an underground cavern, when Lorelei appears before him. She informs Bruno that a letter of challenge has been sent to Red, and he should evaluate Red's skills based upon the parameters set by Lance. When Red arrived at the location, Bruno immediately challenged him to a battle. However, Bruno's skill with his Hitmonlee was too much for Red's Pika to handle, and Pika is subsequently defeated. As the battle escalates, with both Gyarados and Onix pitted against one another, Bruno abruptly stops the battle to allow for a group of Diglett to pass. Bruno imparts to Red the importance of people and Pokémon co-existing together, as Lorelei and Agatha intervene, bringing him to his knees.

Red cornered by Bruno and the other Elite Four.

Bruno is chided by Lorelei for being so weak, denouncing his morals. However, Agatha regains control over Bruno, as he corners Red. Bruno orders his Hitmonlee to attack in conjunction with Lorelei's Jynx and Agatha's Gastly, subsequently defeating Saur and Poli. When Red is subdued by Lorelei's Ice Doll ability, Bruno attacks swiftly with his Hitmonlee, kicking him in the stomach. Bruno reminisces back to his battle with Red whilst at Cerise Island, wondering where Red is. Later, Bruno dispatches his Machop to stall Brock at Pewter City, shortly before making off with the Boulder Badge. At Cerise Island, Bruno faces off against Lt. Surge and Bill aboard his Onix Road. The battle nearly results in the defeat of Surge's Electabuzz and Bill's Vulpix, as Bruno orders his Hitmonlee and Hitmonchan to attack them.

File:Bruno departs.png
Satisfied with his battle, Bruno leaves their company.

When Yellow and Blaine attempt to break through the barrier around the battleground, Bruno attacks them with his Onix. Lt. Surge and Bill flee from Bruno, before getting cornered by his Machamp. However, they lure Bruno into a trap, in which Lt. Surge activates his Electrode's Self Destruct in conjunction with Exeggcute's, proceeding to send a huge explosion rippling throughout the battleground. Bruno falls into the pool of acid, apparently dying. As Lt. Surge seeks Bill's help to get out of the acid pool, Bruno's Hitmonlee entwines its leg around him, dragging him back down. However, Bruno is surprised when Lt. Surge is rescued by none other than Red himself. Bruno prepares for a rematch with Red, who summons his Vee to battle. It is able to defeat both Hitmonlee and Hitmonchan, but Bruno breaks Machamp's belt, causing its power level to increase tenfold. This attack sends Eevee hurtling to the ground, as Bruno orders his Machamp to attack Poli. 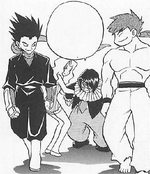 Poli's water-type attacks have little effect on Bruno's Machamp, who defeats it easily. However, Bruno is taken offguard by Eevee, who materialises out of a puddle of water. Eevee transforms into Jolteon, defeating Machamp with Pin Missile. Bruno cedes defeat to Red, imparting that he never truly supported the Elite Four's plan. He states that Pokémon and people should be able to live together with harmony, and thanks Red for the satisfying battle. Later, Bruno rescues Koga from being killed during the destruction of Cerise Island, proceeding to train him under his wing.

Following the final battle at Ilex Forest, Bruno invites two other members of a former criminal organisation, Will and Karen to join the new Elite Four.

Bruno reappears alongside his teammates at Johto's Pokéathlon Dome, announcing the reformation of the Johto Elite Four.