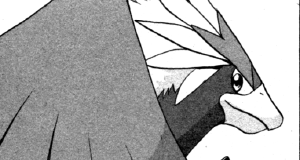 Brav is a Braviary that is one of Black's main Pokémon. He is also the second Pokémon captured by Black in the Pokémon Adventures manga's Black & White chapter; the first is Musha.

Brav is a strong-willed battler and is very obedient to Black during battle. It may be that he has a close relationship with Black since his childhood and has become a loyal partner.

As a Rufflet[edit | edit source]

Brav was a Rufflet when Black was a child, and his very first catch. He was choosing a nickname for him and thought of its evolution's first half of its name which was a Braviary.

He first appeared in Choices! where he was revealed to have evolved into Braviary before Black had obtained his Tepig from Professor Juniper. He also flew away with his trainer towards Accumula Town.

In Nacrene City, he fought against Nacrene Gym Leader Lenora in Black's second Gym battle. He easily defeats her Patrat with an Air Slash before being knocked out by Lenora's Stoutland who used Ice Fang on him, leaving Black with Musha.

At Castelia City, he fought against Burgh's Whirlipede in the Castelia Gym. He easily used Air Slash to knock it out, but was later defeated by his Dwebble, leaving his Tula to battle the Rock Inn Pokemon.

It is revealed that before or after Black's gym battle with Elesa, Brav is currenly with White while she is in another town.