Blaine is the Cinnabar Island Gym Leader in the Red, Green and Blue Chapter of Pokémon Adventures.

Living in Cinnabar Island, Blaine was forcibly recruited by Team Rocket for his scientific knowledge, using him to create the ultimate Pokémon, Mewtwo.

﻿Blaine has a kind personality, as shown when he elicits sympathy towards the numerous townspeople that would have died if Team Rocket used the fused Legendary Trio, rather than being concerned for his own life. Also, he has a deep vendetta against Team Rocket, due to their cruel experimentation upon Pokémon, as well as being misled to facilitate some of their early experiments on Pokémon. 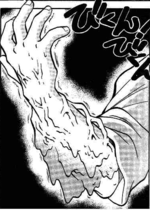 Blaine has fused his own arm, using it as a catalyst to control the normally violent Pokémon, Mewtwo. This ability however, was created as a result of him adding human cells to Mewtwo, resulting in their DNA to become fused, which will eventually culminate in both his and Mewtwo's deaths. This symbiotic relationship between Blaine and Mewtwo means that their cells can detect when the other is nearby. To this end, Blaine refers to himself as "the living Mewtwo compass".

He is identical in appearance to his game counterpart. However, his left arm is horribly disfigured as a side-effect of his experimentation with the legendary Pokémon Mewtwo, which is later healed by Entei's flames.

Blaine was previously a member of Team Rocket, alongside Koga, Lt. Surge and Sabrina. However, he saw the error of his ways when he heard of Red's exploits against Team Rocket. Before he deserted the criminal organisation, Blaine experimented on many Pokémon, namely Eevee, Gyarados and Mewtwo. It was this very Mewtwo which Blaine used his own cells to manifest. However, this led to the destruction of the facility as Mewtwo escaped to Cerulean Cave.

When Red arrives at Cinnabar Island, Blaine is under attack from several Team Rocket grunts. The Team Rocket Grunts prepare to finish Red off, but Blaine intervenes, appearing before them. Blaine takes Red onto his Rapidash in order to effect their escape. However, they are encountered with the legendary Moltres, who blocks their path. Blaine realizes that they will not be able to fight back, and gives Red an Amber to take back to his lab. He attempts to hold off Moltres with Red's Gyarados until Red completes the restoration process, but finds himself hopelessly outmatched. Blaine expresses regret that he was unable to find the Pokémon which he vowed to destroy, as Red swoops in on Aerodactyl. He jumps onto Aerodactyl's back, as they successfully force Team Rocket into retreat by defeating Moltres. Blaine emerges injured from the onslaught, stating that he has another task to accomplish. 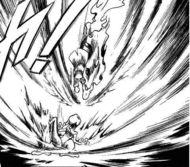 Blaine vows to destroy his creation.

Later, Blaine meets up with Red at Cerulean Cave, where they confront Mewtwo. He rescues Red, explaining how he created Mewtwo by splicing his DNA. As Mewtwo conjures up a psychic tornado with Psywave, Blaine resolves to defeat Mewtwo alone. Blaine punches down upon Mewtwo with his Rapidash, dispersing the tornado and defeating it. As Red runs over to him, Blaine gifts him with a Master Ball. Blaine reveals that Red was the very reason that he quit Team Rocket, and that the monster all along was him. However, Mewtwo emerges heavily injured wielding his ultimate attack, a spoon. Blaine tells Red that the only outcome is to kill Mewtwo, as he charges at it with his Pokémon. However, Mewtwo reforms back into a tornado, as Red's Pokémon begin to get blown away. Blaine again tells Red to stop, as he charges at Mewtwo on Aerodactyl. As Mewtwo and Red near each other, Pika leaps over Red's shoulder, capturing Mewtwo with the Master Ball hidden inside its mouth, much to Blaine's surprise.

Two years after the events of the first chapter, Blaine has worked fervently to try and reverse the connection with Mewtwo, as it would limit their capabilities once apart. When Yellow faces off against Super Nerd William, whose goal was to kidnap Pika for Agatha, she finds herself falling for his tactics. After Yellow is knocked unconscious by a Bonemerang to the chest, Blaine comes to her aid, protecting her from falling. After William is electrocuted by Yellow's tactic, Blaine uses his Growlithe's keen sense of smell to deduce that Red was at Mt. Moon when he went missing. However, before he can further analyze William's clothing, Agatha's Gastly levitates the Super Nerd in order to silence him. Blaine uses his Growlithe's Fire Blast to subdue Gastly, as Yellow saves a Caterpie from getting killed by the attack. He and the other gym leaders introduce themselves to Yellow, commending his selflessness.

Blane deduces that the perpetrator subdued William to prevent him from talking, as the gym leaders prepare their next course of action. However, Gastly emerges from within William's body, enveloping Blaine and the others in fog. However, Blue intervenes, and reveals to Blaine and Yellow that he has fought one of the Elite Four. Blaine and the others are surprised when Blue mentions that Agatha was most likely behind this attack, as he leaves on his Charizard. Later, Blaine returns to Cinnabar Island, and practices under the guise of an elderly man with Mewtwo. He battles against a Junior Trainer, in order to hone his connection skills with Mewtwo. Blaine tells Yellow to follow him into his laboratory, revealing that he is in fact the Gym Leader. Soon after, Blaine receives a message from Brock explaining that an ice figure of Red is at Mt. Moon. Blaine reveals that he has discerned the location to the Elite Four's headquarters. Blaine and Yellow then go their separate ways, proceeding to venture towards the main base, Cerise Island.

Upon arrival at the island, Blaine meets up with Blue, as they proceed through the cavern. Several Pokémon shadows approach them, and Blaine believes it to be an ambush from the Elite Four. However, the Team Rocket executives appear, repealing his statement. Blaine and the others sense the movements of Yellow, Green and Bill. As they all regroup together, Sabrina uses her Spoons of Destiny to pair each Pokédex Holder with one of the Rocket Executives. As such, Blaine is paired with Yellow, whereupon they each resolve to bring down the Elite Four. Blaine and Yellow proceed to come across Lt. Surge and Bill's battle, but are unable to intervene due to the barrier set up by Bruno. Lance appears behind them, as the two prepare to battle him. Blaine unleashes his Mewtwo to counter Aerodactyl's Hyper Beam, surprising Lance. As Blaine instructs Mewtwo to continue its attacks, he wonders how long his body will be able to cope with the pressure. However, it is this connection that results in both Blaine and Mewtwo's defeat, as it returns to its Poké Ball, preventing Blaine from suffering any more damage.

During the Mask of Ice's uprising in the Johto region, Blaine ultimately becomes involved during the Gym Leader contest. The Gym Leader is partnered with the legendary Pokémon Entei, but after Blaine is incapacitated, Entei teams up with Silver instead. During its brief allegiance with Blaine, it purified his left arm of its genetic connection with Mewtwo through the healing property of its flames.