Bianca's Escavailer is a Pokemon that used to belong to Professor Juniper when it was a Karrablast. It was traded for Bianca's Shelmet in BW065. 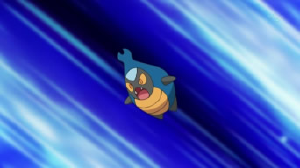 Escavalier appeared as a Karrablast in BW065 where it was owned by Professor Juniper. Since Bianca wanted to trade her Shelmet for Karrablast, they managed to trade. Karrablast and Shelmet both evolved into Escavalier and Accelgor respectively.

Later, Escavalier started to disobey Bianca and chase her around until with Prof.Juniper's Accelgor in a double battle, it learned to listen to Bianca in the end.