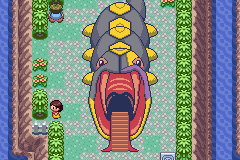 The entrance to the Battle Pike

The Battle Pike is a facility in the Hoenn Battle Frontier.The building itself appears to be modeled after the Frontier Brain's Seviper, Pike Queen Lucy, who controls this facility. You can battle her after completing the Battle Pike twice. When the player defeats her, he/she gets the Luck Symbol. The Battle Pike challenge is a challenge that tests the player's luck. It has a maze inside. The rooms can have two wild Pokémon, a room with a trainer, a room with a Pokémon that gives the player's lead Pokémon a status effect, or a room with a woman in it that heals all of the player's Pokémon. Between each of these rooms is a room with three paths to choose from. There is a woman standing between the second and third paths that will give you a hint about one of the paths.

In the anime, the Battle Pike is by Fuchsia City and is the fourth Battle Frontier facility that Ash challenges.