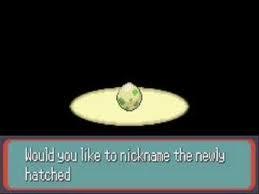 A Bad Egg is an Egg that a player can obtain in all Generation II and on Pokemon games. Though the term is often also applied to glitchy Eggs in general, it is only used in-game to refer to noticeably-corrupt Eggs, which result from the use of cheat devices such as Action Replay, or Poke-GTS.

How to obtain[edit | edit source]

If you have an Action replay and you go on wifi in generation IV games, Nintendo will sense that you used it, then send you a Bad EGG in the form of a regular Egg. It will hatch much faster than a regular egg does, so you can tell when it is going to be a Bad egg when your character says huh, oh, or anything under that category. In some conditions, the egg will not hatch.

One step after it hatches, the Bad EGG will hatch, and your character will say what is specified in the above section. The game will go completely black, and the battery will have run dry. Whether there is a way to get rid of it or not is unknown, besides the fact of starting a new game.

It is possible to, through the use of cheat devices, catch an Egg in the wild or simply turn an already-owned Pokémon into an Egg. Such Eggs don't have any data specifying what they are supposed to hatch into, so they will simply hatch into more Eggs.

In some cases, it is actually possible to battle with these Eggs; however, attempting to do so will freeze the game, as their back sprite is undefined. This means you should be careful while using cheat devices or otherwise just train/catch your Pokémon.

The Generation III games are the only games to actually make use of the term "Bad EGG". The string is used to identify Eggs that appear to have been corrupted. The Trainer Memo section of such Eggs' summaries invariably states that they are "A peculiar egg obtained in a trade." Such Eggs do not actually hatch unless prompted to with a cheat device. The bad egg can also be found while cheating at some parts.

In Generation IV, bad eggs are sometimes found by using cheats to capture your opponent's Pokémon. Bad Eggs also occur when the player uses a cheat device to catch Pokémon in the wild that are not found in the game, like Regice in Pokémon Pearl, or Mesprit in Pokémon Soul Silver. A perfectly normal Pokémon in the PC will be identified as 'Bad Egg'. The elite four in Ruby ,Emerald, Sapphire, Leaf Green, and Fire Red all have at least one bad egg in their party, so while utilizing a cheat to capture their Pokémon, make sure to save first. The Bad Egg will also dry out your battery so watch out! Also after this occurs clock based events will not work

In generation V, most glitches have been fixed for bad eggs. In other words, if you recieve one, your game will not freeze or corrupt, but that also means you can't get rid of them with the current resources, unless you hack into the game using a device of some sort. In further detail, the egg cannot be used in a battle or be released. It acts like a normal egg that never hatches. If you manage to get one that does hatch, it will act like an ordinary one and freeze the game.