Dreams by the Yard Full! is the 6th episode of Pokémon: Best Wishes. Ash beats Cilan and thus earning him the Tri Badge. At the Pokémon Center Ash, Iris, and Cilan see Fennel for the first time with a Munna she carries on hand and learns about a Musharna that is missing.

The battle looks like it would be over soon, but Oshawott uses his shell to deflect the SolarBeam. Realizing that the shell could be a problem, Cilan has Pansage use Bullet Seed for the purpose of knocking it away, giving Pansage the opportunity to attack. Oshawott eventually gets the shell back and soon the shell grows into the shape of a blade. Ash soon realizes Oshawott learned Razor Shell. Ash uses this opportunity to have Oshawott use Razor Shell on Pansage. After a samurai movie style slash, the air was tense, both Pokémon were standing but eventually, Pansage fell, thus giving Ash the victory. After an intense battle Cilan gave Ash the Trio Badge as proof of his victory in the Striaton Gym.

Later, Cilan met up with Ash to ask about how he came up with such brilliant strategies, but before he could answer Iris came in with Axew who fell asleep. Then Fennel came in with her Munna and she explained that it's the work of Dream Mist. They head over to the Dreamyard courtesy of the Striaton Officer Jenny and Fennel explains everything.

A short while later they encounter Team Rocket at the Dreamyard with Musharna, which apparently survived. However, thanks to Munna and Pikachu, Musharna was saved and reunited with Fennel but Team Rocket retreated, their mission was successful.

After saying goodbye to Chili and Cress, Cilan accompanied Ash on his journey along with Iris who popped out of a tree. 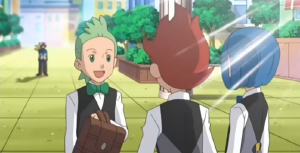