"Enter Iris and Axew" is the second episode in the season Pokémon: Black and White.

In this episode Ash decided to go on a quest in the Unova Region. He is still at his goal catching every Pokémon in the world. Professor Juniper gave Ash five empty Pokéballs and a new Pokédex, she also told him where the nearest gym was.

The next morning Ash left on his new quest, however Oshawott followed Ash all the way to Route 1. When Ash was walking in route 1 he heard something in the bushes, he checked to see if it was a pokémon. The Pokédex said "Axew, the Tusk Pokémon. Axew marks its territory by making scratch marks on trees with its tusks, which regrow if they fall out." Ash looked at the Pokédex picture then the thing hiding in the bush. He said to himself "That doesn't look like this... I'll catch it anyway!"

Ash threw a Pokéball to the thing in the bush, and it just bounced right off it. A girl popped out of the bushes and yelled "OK, What was that for?!" Ash replied "See, I was only trying to catch a Pokémon." The girl asked "Oh, so what you're really telling me is that I look like a Pokémon. Your Pokédex, is this cute face in there? Tell me, IS IT?!" the girl smiled but suddenly got mad again. Ash said confused "No, uh...Sorry." The girl smiled and said "Fine, I accept your apology. But you've got a long way to go as a trainer if you think I look like a Pokémon. Right , Axew?" A Pokémon popped out of the girl's hair and happily said "Axew Axew!" Ash gasped "Wow, that's where it was." The girl noticed Pikachu and gasped "Whoa, no way! Pikachu?" she grabbed it and hugged it 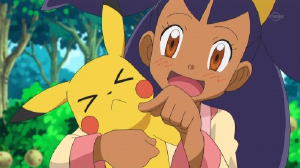 "You've got to be the sweetest thing ever! It's so cute! And those jiggling cheeks! You can't find anything this jiggly in Unova! Well I, for one, am dying to know what a Pikachu's doing here. Now come on, Tell me! Tell me! Tell 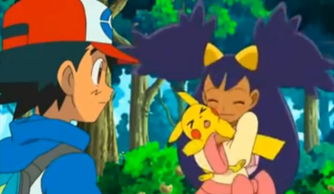 me!" Ash answered "We're from Pallet Town in the Kanto Region." The girl asked "Pallet Town?" Ash answered "Yeah. I'm Ash, And I wanna enter the Unova League." the girl contined "Isn't that nice? It's nice to meet you. I'm Iris" but right after she told Ash her name, Pikachu shocked her with a Thunderbolt.

Iris apologized to Pikachu. She told Ash about the great thunder that happened the other day. Ash told her "Sure was Professor Juniper said Zekrom caused all that lightning." Iris gasped "Zekrom, the legendary Pokémon caused it?! Please, I want to know everything?!" Iris got interrupted, Pikachu pointed at a Pokémon. Ash looked at the Pokémon "The Pokémon from yesterday!" Ash ran with the Pokémon and Iris caught up with him.

Meanwhile with Team Rocket, they are discussing with plans on how to get Pikachu with Giovanni and he tells them "I have every confidence that you won't let me down." But after they are done talking, a school of Woobat attacked them.

While that was happening Ash followed that Pokémon still trying to catch it. Ash looked up the Pokémon on the Pokédex and it said "Deerling the Season pokémon. With the change of each season, Deerling's appearance changes as well." Ash got a Pokéball and threw it at Deerling. The Pokémon used its ear to stop the Pokéball from coming at it. Iris tells Ash "You don't get it. You act like a little kid...If you want to catch it, you've gotta battle it." Ash remembered "I knew that! Come on Pikachu!" Pikachu tagged along with Ash. Once all the Deerling noticed Ash and Pikachu, they ran away. After that a herd of Pokémon ran over Ash and Pikachu. Ash was dizzy and so was Pikachu. Ash said "Ok, I give. Who was that Pokémon anyway?" then he and Pikachu collapsed. Iris said: "It was a Patrat. You are a little kid." Axew agreed with Iris.

Later Ash and Iris were picking apples for dinner. Ash pick an apple and asked "Wonder if I can eat this?" then a pile of apples fell on top of him. Iris said happily "Come and get it! Dinner!...Huh? Where'd Ash go?" Ash answered weakly from under the pile of apples "Down here..." Iris said "Sorry about that." They talked until night. Iris said "I see...So Pikachu had a really rough day because of Zekrom." Ash continued "Pikachu must've stored up and then let out all its electricity, because of all the intense stuff Zekrom was up to, that's what the professor said." Iris said "Well Zekrom is a legendary Pokémon you know. I'd love to meet Zekrom some day. I can't wait to meet Zekrom!" Ash contined "Unova's got lots of cool Pokémon, not just Zekrom, I'll meet them all. Iris?" When Ash checked on Iris she was sleeping in a tree. Ash sighed. Ash looked up in the sky "That Unova sky's full of stars. From now on, our journey's gonna be under this sky." A shooting star flashed in Ash's and Pikachu's eyes, Ash said excitely "A shooting star. That's great. Good luck. Pikachu, don't you feel lucky too?" While they where talking, Oshawatt was still following them!

The Next sunny day Ash continued on his quest to become a Pokémon Master. However Iris vanished. Ash said to himself and Pikachu "Iris left early, you know? I wonder where she could've gone? Well, no big deal. Its a brand new day." Ash stopped talking when he heard something walking. It was a pigeon-like like Pokémon. Ash checked the Pokédex "Pidove, The Tiny Pidgeon Pokémon. A Pidove flock's cooing can get extremely noisy. Pidove is not attracted to shiny objects." Ash said out loud "Cool, Pidove... Lets go!" Ash followed the Pidove to find a group of Pidove. Ash pointed at one of the Pidove. "OK, Let's battle that one!" Pikachu jumped into battle mode, Ash told Pikachu to use Thunderbolt once, the Pidove fainted. Pikachu's Thunderbolt scared all of the Pidove, they started to attack him. One of the attacks was Air Slash, two of the Pidove used Quick Attack. While that was happening, the fainted Pidove recovered and flew away with the rest of the group. Ash noticed there was one last Pidove. Ash told Pikachu to use Quick Attack, the Pidove got hit. After that Ash told Pikachu to finish it with Iron Tail, Ash threw a Poké Ball 1...2...3 POP! The Pokémon escaped. Then the Pidove used Whirlwind, then it used Quick Attack after that, Air cutter, then it used Quick Attack again, Pikachu jumped right before it could hit. The Pidove hit a tree and got hurt. "All right, Thunderbolt! Now" Ash yelled Pikachu used Thunderbolt, the Pidove tried to escape but it got hit. Then Ash threw a Pokéball and he had caught it! Iris happened to appear out of nowhere and said "Whoa. You're that excited about catching a little Pidove? What a kid." While Ash and Iris was talking Iris's Axew found an apple, Pikachu was hungry so Axew cut the apple in half with it's teeth, they both started to eat right when Pikachu took a bite out of it, two hands grabbed Axew and Pikachu. Pikachu yelled "Pika Pika" while Axew yelled "Axew Ax!" 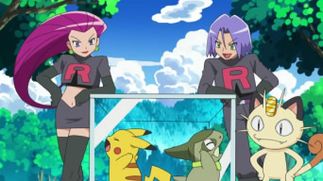 Pikachu and Axew are trapped in the glass box

Ash and Iris noticed they saw a 2 people and a Meowth Ash yelled "You guys again?" It was Team Rocket Jessie and James and of course Meowth. They did their introduction. Iris asked "Team Rocket? Who are they?" Ash answered "They're a group of bad guys who steal peoples pokémon!!" Jessie said "Right, evil deeds like stealing Pokémon are our stock and trade to rule the world, because that's what we do." Iris yelled "Axew's not yours, it's mine! Give it back." James looked at Axew "I see, so this is Axew" Meowth continued "And we claim Axew as part of our takeover of the Unova region!" Iris gasped "Hold on, you must be a Meowth. What're you doing here?...Forget about that, how can you talk?!" Meowth answered "Simple, I'm a genius!! A Meowth that you only get to hear once in a lifetime." They threw Pikachu and Axew in a glass box. Pikachu and Axew tried to break out but it was impossibe. Ash said while throwing a Pokéball "No way. Pidove, I choose you!" Pidove came out of the Pokéball. James said "He's using a region pokémon too" Jessie told Meowth to fight. Meowth was about to use Fury Swipes but it failed due to Pidove using Gust.

Jessie told Ash that he's doing well. Jessie threw a Poké Ball, she said "Try my Pokémon on for size!" A fluffy bat looking like pokémon appeared out of the Poké Ball. Ash asked "What's that?" Iris answered "It's a Woobat!" Meowth said "A Woobat! That name's got a nice ring to it." Jessie continued "Nice ring is a good thing. Woobat, use Air Slash!" Ash yelled "Dodge it quick! All right use Quick Attack" Pidove avoided it. Then it used Quick Attack. Jessie told Woobat to avoid it and then use Gust. Then Pidove fainted. Ash and Iris ran to Pidove. Ash told it "Pidove! Snap out of it!" Then Jessie put Woobat back in it's Pokéball. James said "Our premier mission in Unova is complete. Off we go!" James opened a suit case which turned out to be a hot air balloon. As they left Jessie said "Nice doing business with you twerp." Iris started to climb a tree. Ash started climbing too. He jumped and tried to grab the glass box that Pikachu and Axew was in. Iris thought to herself "No way". Ash couldn't grab the glass box and he fell down. Suddenly Oshawatt appeared! It threw the Shell that was on it's chest to Team Rocket's Balloon. Team Rocket's Balloon fell down. When it fell to the ground the glass box broke. Ash and Iris caught Pikachu and Axew while Oshawatt caught it's shell. Oshawatt started to dance. Team Rocket fell down. Jessie was mad. Jessie took Woobat's Pokéball and threw it. Woobat came out and used Air Slash on Pikachu and Axew. Jessie said "Air Slash again!" Woobat used all of its strength to make this Air Slash. Right Before it could hit Pikachu or Axew, Oshawatt used Water Gun. Then Finally Ash told Pikachu to use Volt Tackle. Right before it could hit Team Rocket, James threw something that created smoke and they escaped. Ash asked "Did they escape?" After a few seconds Pikachu fainted.

Later that day Ash and Iris were in the Pokémon Center, Nurse Joy healed all of Ash's and Iris' Pokémon. They were talking with Nurse Joy when Ash started to wonder why did Oshawatt save their pokémon. While they were talking, Oshawatt was watching them in a window.