Aura Storm is Lucario's Final Smash in Super Smash Bros Brawl and, like other Final Smashes, can only be activated after breaking a Smash Ball. Aura Storm is not a move in the Pokémon games.

When using Aura Storm, Lucario crouches down and telepathically shouts "Watch the power of aura!", then leaps into the air. Any character in the way takes minor damage if they are farther away, but a lot more when up close. It also spikes with a set but high knockback when used up close. Lucario raises its hands, shining with aura. Lucario then unleashes a powerful beam of dark blue aura energy down. The attack hits multiple times before a big finisher that has decent KO power. Lucario can angle the beam sideways during both the windup and the launch, which is a decent way to catch unhit enemies, although angling can also free trapped targets (which otherwise cannot escape). The move is one of the more difficult Final Smashes to use effectively,as flying or floating characters; or characters with a great recovery as may be able to easily outrun the beam, while other characters can manage to dodge most of the attack depending on the stage.

The amount of damage given to opponents dep 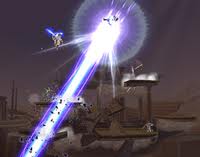 ends on Lucario's damage. If he is at 0%, then the Aura storm will only cause 24% and have little knockback. However, if Lucario is at 182% damage (when his aura is the strongest), the Aura Storm will cause 78% and will be a garunteed KO.

Some players of Super Smash Bros Brawl speculate the furiously powerful beam of aura to be a renamed Hyper Beam. Reasons include;