Assunta managed to qualify for the Kanto Pokémon League and in round six she was drawn against Ritchie. She managed to defeat Ritchie and eliminate him from the competition but she was down to her last Pokémon when she won the match.

It was a close battle after Assunta's Rhydon and Venomoth battled Ritchie's Charmander and Butterfree respectively. Both trainers were down to their last Pokémon and it was Ritchie's Pikachu versus Assun 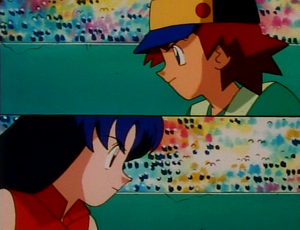 ta's Ivysaur. Ivysaur quickly charged at Pikachu who just managed to avoid the attack, however, Ivysaur used Vine Whip which swept Pikachu off of its feet. Ivysaur charged again at Pikachu who tried to halt its progress with a Thundershock but Ivysaur either dodged the attack or defended itself with its vines. Ivysaur then launched itself in the air and launched a Solarbeam attack followed by a tackle attack which Pikachu could not recover from and eliminated Ritchie from the competition and putting Assumpta into the Semi-Finals. (On the podium at the end Assunta's silhouette matches the girl on 2nd place very well.)