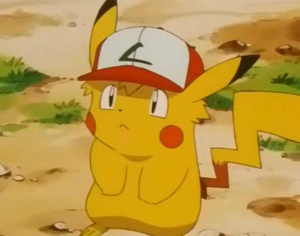 Ash transformed into a Pikachu by Lily.

'Ashachu' Commonly spelt Ashchu' 'is the name given to Ash by fans when he was accidently transformed into a Pikachu by a magician named Lily at the end of the episode Hocus Pokémon. Ash remained in this form until the beginning of the next episode As Clear as Crystal, where he was reverted back into a human when the spell wore off.

Though this was a very minor occurrence in the Anime series, it has become a target among some fans, being used in fan-fiction or fan art. Usually, Ashachu commonly makes cameos in the Pokémon series Sinnoh.

After Ash freaked out being a pikachu, he played with his Pikachu and other Pokémon. At the end of the episode, Ash - still a Pikachu - was on his back. But Ashachu turns back into Ash at the beginning of the next episode..