Ash's 30 Tauros are a herd of Tauros that were captured by Ash in the Kanto Safari Zone. 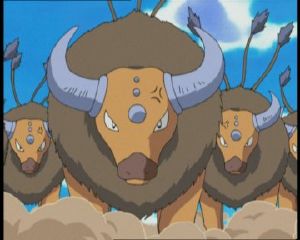 Ash spent a lot of time in the Safari Zone in The Legend of Dratini, attempting to catch as many Pokémon as he possibly could. However, all he managed to catch were 30 Tauros, as they always ran in front of his Poké Balls when he tried to catch another Pokémon. All 30 were sent to Professor Oak's lab.

The herd are mainly seen to be stampeding. Mostly, this occurs in the wide open space at the lab. Their stampeding has been put into good effect, as they woke up Ash's Snorlax when the Professor needed it. However, their stampeding has also damaged properties, like when Ash first returned to Pallet Town when they stampeded through a fence and when they stampeded through the lab, leaving a huge hole in the wall.

Ash decided to use one of the Tauros in his battle against Drake, in Hello, Pummelo! and Enter the Dragonite. Initially, he was confused by Gengar's Confuse Ray and had to be recalled. Tauros was then sent out to battle Drake's Venusaur, which he defeated by himself. He then went on to weaken Dragonite before being defeated.

Ash used Tauros as part of a Tauros-battle tournament in Tricks of the Trade, which he went on to win. Tauros was also used against Gary in Can't Beat the Heat!, where he was defeated by Gary's Nidoqueen.

Upon Ash's return to Pallet Town following his adventures in Hoenn, the Tauros charged towards him along with his other Pokémon. However, in their excitement, they carried Ash off and he had to be rescued by Bayleef. In Talking a Good Game and Second Time's the Charm, Ash used Tauros to battle against Salon Maiden Anabel.

Despite capturing all his Tauros in green Safari Balls, and these being seen in storage at Oak's lab, Ash always uses regular red PokeBalls when sending his Tauros into battle.