Ash's Pignite is the third Pokémon that Ash obtained in the Unova region.

As a Tepig[edit | edit source]

﻿Before the events of The Battle Club and Tepig's Choice!, Tepig was tied to a post and abandoned by his Trainer after defeat in a battle against a Deerling. He ran away after Don George tried to untie him. When Ash visited the Accumula Town Battle Club, he initially mistook Tepig for an Umbreon after seeing it on a security camera stealing food from a warehouse. Ash discovered Tepig eating the bait he and Iris laid out for him and realized that it was actually a Tepig covered in soot. Tepig was extremely hungry and thin, as there was rope tied around his snout, preventing him from eating. Ash untied him and carried him back to the Battle Club. When Pikachu was stolen by Team Rocket, Tepig used Ember to rescue him. Ash then proceeded to catch Tepig.

Since Ash promised to use him in his first Gym Battle, Tepig fought against Chili's Pansear in Triple Leaders, Triple Threats!. His attacks did not do much damage to Pansear, whose Fire Punch, Flamethrower and Dig attacks hit Tepig hard. One of these Digs launched Tepig into the air. Ash commanded it to dive down Pansear's hole. Tepig then managed to bite Pansears tail and send it flying. He then defeated Pansear with a combination of Ember and Tackle.

Tepig was confirmed male in Snivy Plays Hard to Catch! when he was hit by a wild Snivy's Attract, forcing Ash to recall him.

In A Rival Battle for Club Champ!, Tepig battled against Trip's Tranquill. Like Oshawott, Tepig was defeated by Tranquill's Super Luck-boosted Aerial Ace.

He battled Lenora's Lillipup in The Battle According to Lenora and was forced back into his Poké Ball by Lillipup's Roar. After Lenora's Watchog defeated Oshawott, Tepig battled Lillipup again, but lost. After training in Rematch at the Nacrene Gym!, he battled Lenora's Herdier. After a short battle, he was sent back by Roar. After Oshawott and Watchog knocked each other out, Tepig battled Herdier again and won using its newly-learned Flame Charge attack.

Tepig was used again in Ash's third Unova gym at Castelia City. He battled Burgh's Dwebble in Battling For The Love of Bug-Types!, and even though it was a Bug-type, he was defeated by its Rock Wrecker.

In Ash and Trip's Third Battle!, Ash used Tepig against Trip's Vanillite. Despite the type advantage Tepig had over Vanillite, the match ended in a draw.

In Battle For The Underground!, while trying to remove Team Rocket from the Battle Subway in Nimbasa City, Tepig learns a new attack, Flamethrower.

He battled alongside Cilan's Pansage in Lost at the Stamp Rally! where they were battling against Subway Masters Emmet and Ingo's Chandelure and Eelektross while in the Battle Subway. Even though they tried their best, Tepig and Pansage got defeated.

In A Maractus Musical!, he teamed up with Pikachu and Snivy to battle Toby's Maractus trio. Using their combination of Thunderbolt, Leaf Storm, and Flamethrower, they fought well. When one of the Maractus, Tussy, panics, they manage to win.

In Scraggy and the Demanding Gothita!, he was used to battle against Katharine's Mandibuzz. It used its full attacks against the Dark-type Pokemon and fought well, dodging attacks. When their Brave Bird and Flame Charges collided, he remained victorious.

As a Pignite[edit | edit source]

It evolved in Evolution by Fire! and turned the tide in the battle with his former trainer. Seeing that he never liked it, it stayed with Ash. 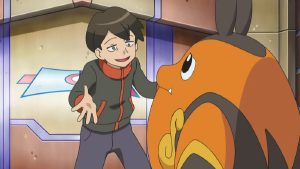 In Caution: Icy Battle Conditions! Pignite was used against Brycen's Cryogonal and Beartic. He was able to take out Cryogonal but lost to Beartic.

In Rocking the Virbank Gym! (Part 2), Pignite was up against Roxie's Scolipede and after his Flame Charge was blocked by Scolipede's Screech and its Sludge Bomb was intercepted by Pignite's Flamethrower, Pignite used the smoke to his advantage and hit Scolipede with Flame Charge and after Scolipede dodged Pignite's second Flamethrower, it used Toxic and Pignite got poisoned but he managed to hang in there and defeated Scolipede with Fire Pledge. He was cured of the poisoning by the Pecha Berry that Roxie gave him. He continued to battle against Roxie's last Pokémon, Garbodor, and after a tough battle, Pignite got knocked out by Garbodor's Hyper Beam.

Pignite battled Dawn's Mamoswine in The Mystery of the Missing Cubchoo!. He started the battle with a Tackle which dealt lots of damage on Mamoswine. Mamoswine then hit Pignite with Take Down and deals lots of damage too. He managed to dodge Mamoswine's Hidden Power by quickly jumping. He then hit Mamoswine with a very powerful Flame Charge. He managed to counter Mamoswine's Ice Shard with Flamethrower. Mamoswine then uses Take Down and then Hidden Power. Pignite used Flame Charge and hit the Hidden Power head on. The battle ended in a draw because both of them got knocked out.