From the Azurilland Wiki, a database for the Pokémon series that anyone can contribute to
(Redirected from Ash's Grovyle)
Jump to: navigation, search

Ash's Sceptile was the second Pokémon Ash caught in the Hoenn Region.

Sceptile was caught while he was a Treeko and was the second Pokémon Ash caught during his journey in the Hoenn Region. Treeko was a very stubborn fighter who never gave up in battle. With the help of another trainer's Grovyle, Treeko learned Bullet Seed, having previously known no Grass type moves despite being a Grass type Pokemon. Treeko evolved into Grovyle whilst battling a powerful Loudred who also evolved into Exploud.

After evolving, Grovyle was used often in the Hoenn region, notably being able to defeat Norman's Slaking and Winona's Altaria despite having type disadvantage against the latter. In the Hoenn league tournament, Grovyle defeated Katie's extremely powerful Walrien as well as Morrison's high level Steelix and held his own against Tyson's Metagross. Grovyle stayed with Ash when he travelled to the Battle Frontier and was used during his battle with Greta but was defeated by Hariyama.

When Sceptile evolves in the episode "Odd Pokémon Out", it was unable to use any of its attacks since it's heart was broken when Nurse Joy's Meganium fell for a wild Tropius instead of Grovyle. After seeing Meganium in danger, Grovyle evolved to try and protect it to no avail. 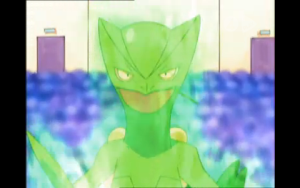 Two episodes later, in "Cutting the Ties That Bind", Sceptile finally regained all of it's moves as well as the new and powerful SolarBeam attack. Sceptile used Solarbeam to defeat Spencer's Claydol. Sceptile is an expert at the move Leaf Blade, its signature move. It was even able to defeat Tobias' Darkrai, who was considered to be virtually unbeatable, with a powerful Leaf Blade, becoming the only known Pokemon to have defeated the legendary Pokemon. However Tobias' Latios easily defeated Sceptile with Giga Impact.

It will reappear along with all of Ash's Pokemon in an upcoming episode of Best Wishes Season 2.