Ash's father is the unnamed father of the character Ash Ketchum from the Pokémon Anime series and husband to Delia Ketchum.

From very minor portions of dialogue, it can be assumed that his father started on a journey from Pallet Town much like Ash. Never formally introduced, the identity of his father has always been under heavy speculation. This speculated character however, have attained no hard evidence that they are in fact related to Ash in any way. In addition to that, during an interview with a storyboard artist for the Anime series, the artist stated that Ash's father 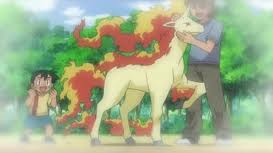 Ash's father with a Rapidash.

is a man who is on his own Pokémon journey as a Trainer. Rumors say that Silver from the Pokémon Chronicles could be his father. In The Spell of the Unown the commentary version, the producer announced that more about him will be revealed in season 5, which eventually turned out to be untrue. Ash's father seems to have had a Rapidash as his Pokemon. He is seen with a Rapidash in a blurry flashback in the Diamond and Pearl Galactic Battles episode "Strategy Begins at Home!", where Ash is recalling some of his past. Some fans believe that Giovanni is Ash's father because Giovanni was in a relationship with Ash's mother in the past. This is impossible because Ash's father showed affection for his Rapidash and Giovanni would never show affection for any of his Pokemon, not even Persian.