Ash's Boldore was the eighth Pokémon Ash caught in the Unova region. 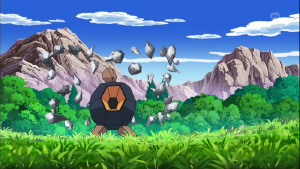 Ash's Boldore as a Roggenrola.

Ash caught his Boldore as a Roggenrola in BW037: Gotta Catch a Roggenrola! after he helped it to save a group of some other Roggenrola from Team Rocket. After an intense battle with Tepig, Ash caught it. It was used again in BW038: Where Did You Go, Audino? in order to search for the missing Audino in a town.

In BW050: Battle For The Underground!, it used Flash Cannon alongside Tepig's Ember (Flamethrower) and Axew's Dragon Rage to escape from Dr. Zager's helicopter at the Battle Subway.

In BW062: Stopping the Rage of Legends! (Part 2) it saved Tornadus, Thundurus and Landorus by using Flash Cannon on the helicopter piloted by Dr. Zager over and over again until joined by Pikachu, Axew, Emolga and Pansage to destroy the cages the trio was in.

In BW063: Battling the King of the Mines! Ash used it to battle Clay's Excadrill. During the battle it evolved and at the same time learned Rock Smash and Rock Blast and helped Ash win the Quake Badge.

It appears again in BW065: Evolution Exchange Excitement! where it had a Tag Battle with Cilan's Crustle against Professor Juniper and Bianca's Accelgor and Excavalier. Boldore put up a good fight managing to inflict some damage with Rock Blast, Rock Smash and Flash Cannon but it was defeated by a double Hyper Beam attack.